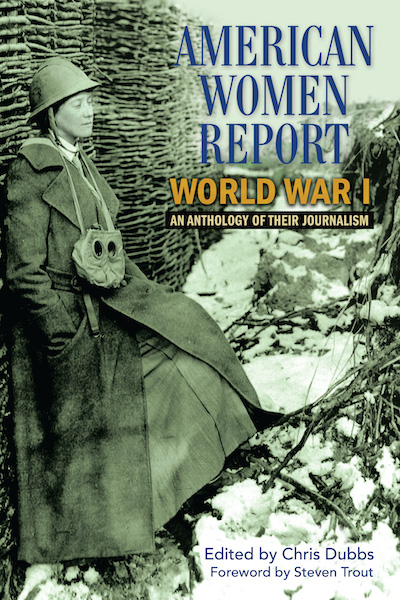 American Women Report World War I: An Anthology of Their Journalism

In the opening decades of the 20th century, war reporting remained one of the most well-guarded, thoroughly male bastions of journalism. However, when war erupted in Europe in August 1914, a Boston woman, Mary Boyle O’Reilly, became one of the first journalists to bring the war to American newspapers. A Saturday Evening Post journalist, Mary Roberts Rinehart, became the first journalist, of any country, of any gender, to visit the trenches. These women were only the first wave of female journalists who covered the conflict.

American Women Report World War I collects more than 35 of the best of their articles and those that highlight the richness of their contribution to the history of the Great War. Editor Chris Dubbs provides section introductions for background and context to stories such as “Woman Writer Sees Horrors of Battle,” “Star Woman Runs Blockade,” and “America Meets France.”

The work of female journalists focuses more squarely on individuals caught in the conflict—including themselves. It offers a valuable counterpoint to the male, horror-of-the-trenches experience and demonstrates how World War I served as a catalyst that enabled women to expand the public forum for their opinions on social and moral issues.

“This is an extraordinary anthology—there isn’t a dull piece in the bunch, and the most striking stories are as riveting as any work of war literature I know.”—Steven Trout, author of On the Battlefield of Memory

American Women Report World War I: An Anthology of Their Journalism