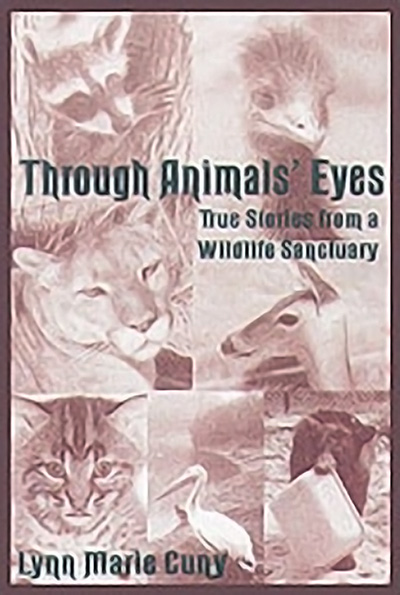 Through Animals' Eyes: True Stories from a Wildlife Sanctuary

About Cuny's Through Animals' Eyes

“The day we met she was feeding five beautiful yearlings intravenously, who surely would have died from dehydration, while she simultaneously supervised the feeding of skunks, possums, squirrels—you name it. She is selfless and dauntless in her battle to rescue and rehabilitate animals. I feel privileged to know her and serve on her board. There are few better qualified to look through the eyes of an animal. It is a beautiful, touching book.” —Loretta Swit, actress

Founded by Lynn Cuny in 1977, Wildlife Rescue & Rehabilitation (WRR) provides rescue, rehabilitation and release of orphaned, injured and displaced wildlife. WRR also gives permanent care, in large natural habitats, to indigenous wildlife who, due to severe injuries, have been deemed non-releasable. Permanent care is also provided for non-indigenous wild animals who have been victimized by the exotic pet trade, rescued from roadside zoos, or retired from research facilities. WRR rescues over 5,000 animals annually and maintains a 365-days-a-year wildlife emergency hotline. Through the stories of her experiences with the various animals, Lynn hopes to dispel the belief that non-human animals do not reason, have no emotions, show no compassion for each other and for other species.

Lynn’s stories from Wildlife Rescue & Rehabilitation (WRR) range from the humorous to the tragic, from the surprising to the inevitable. The animals she describes range from the day-old field mouse to the three-legged coyote; from a fox-loving hen to the exotic and abused mountain lions, macaque monkeys and black bears. Always, she reveals the dignity of each animal, trying to survive in a world made cruel and dangerous by the thoughtlessness of humans.

“The wild animals begin showing signs of nest building early in the spring. One squirrel mother-to-be was very persistent in her attempt to construct a nest for her future offspring. One of our members noticed a squirrel dragging a Santa Claus suit up a large oak tree just outside her window. Needless to say, the Santa suit was several times larger than the expectant squirrel. This did not deter the squirrel. She succeeded in carrying the red and white garment about halfway up the tree before it became snagged on a piece of bark. Whenever the fabric caught on the tree, the squirrel would crawl down into the suit, causing it to move and bulge from within as if someone were trying to put it on. This motion continued until the squirrel pulled the garment away from the bark. She continued to tug and pull at it with the obvious intent of dragging it to her nesting site and incorporating it into the most colorful and seasonally appropriate squirrel nest in the city! The suit was last seen hanging at half mast in the oak tree.”

“The core of our black vulture family at the sanctuary is a handsome group of seven who are permanent residents. They had been shot and left for dead by people who do not see the beauty in these magnificent creatures… Vultures are quite gregarious. You often see them playing pick-up sticks, playfully grasping twigs in their beaks and chasing each other until everyone has finally had a chance to enter into the fun. Black vultures are also very accepting, as a young friendless and discouraged emu was about to learn… The emu drew closer. This group of birds was not swimming away, running away, flying away or screaming in terror at his approach like the other birds had done. Suddenly, the emu was standing right in the middle of the largest group of black vultures he had ever seen. Watching from a distance, we couldn’t help but laugh at the scene: Scores of short, coal-black birds were milling about on the ground, and there—in the center—stood ‘the world’s largest black vulture’… It wasn’t long before the emu, too, was playing pick-up sticks.”

“Heartwarming tales of rescued creatures are presented in this collection of vignettes from a large wildlife rehabilitation center… Cuny’s love for her charges shines through in her stories.” —Booklist

“Her brief stories are often touching, such as when she describes a young raccoon, rescued from a fire, self-medicating its burned paws with aloe vera plants; or two crab-eating macaques, confined inside a research facility for eighteen years, experiencing the outdoors for the first time.” —Natural History

“This book deserves a spot on every library shelf along with such nonfiction animal story classics as Adamson’s Born Free, North’s Rascal, and the work of Jane Goodall… Cuny’s achievement is in her ability to present the animals’ experiences in a factual, sympathetic, but unsentimental tone.” —Appraisal: Science Books for Young People

LYNN MARIE CUNY is the author of Through Animals’ Eyes: True Stories from a Wildlife Sanctuary from UNT Press. She is a native of San Antonio.

LYNN CUNY, Executive Director of WRR, began her rescue work at the age of three by saving the lives of earthworms after a hard rain. She serves on the boards of the Summerlee Foundation and the Ahimsa Foundation and lives outside of San Antonio.

Through Animals' Eyes: True Stories from a Wildlife Sanctuary