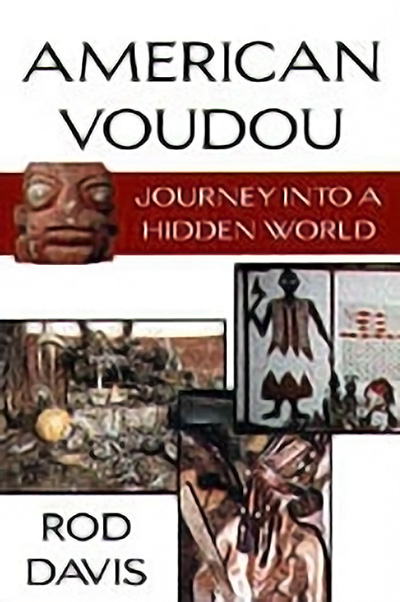 Voudou (an older spelling of voodoo)—a pantheistic belief system developed in West Africa and transported to the Americas during the diaspora of the slave trade—is the generic term for a number of similar African religions which mutated in the Americas, including santeria, candomble, macumbe, obeah, Shango Baptist, etc.

Since its violent introduction in the Caribbean islands, it has been the least understood and most feared religion of the New World—suppressed, out-lawed or ridiculed from Haiti to Hattiesburg. Yet with the exception of Zora Neale Hurston’s accounts more than a half-century ago and a smattering of lurid, often racist paperbacks, studies of this potent West African theology have focused almost exclusively on Haiti, Cuba and the Caribbean basin. American Voudou turns our gaze back to American shores, principally towards the South, the most important and enduring stronghold of the voudou faith in America and site of its historic yet rarely recounted war with Christianity.

This chronicle of Davis’ determined search for the true legacy of voudou in America reveals a spirit-world from New Orleans to Miami which will shatter long-held stereotypes about the religion and its role in our culture. The real-life dramas of the practitioners, true believers and skeptics of the voudou world also offer a radically different entree into a half-hidden, half-mythical South, and by extension into an alternate soul of America. Readers interested in the dynamic relationships between religion and society, and in the choices made by people caught in the flux of conflict, will be heartened by this unique story of survival and even renaissance of what may have been the most persecuted religion in American history.

Traveling on a criss-cross route from New Orleans across the slave-belt states of Mississippi, Alabama and Georgia, dipping down to Miami where the voudou of Cuba and the Caribbean is endemic, and up to New York where priests and practitioners increase each year, Rod Davis determined to find out what happened to voudou in the United States.

A fascinating and insightful account of a little known and often misunderstood aspect of African-American culture, American Voudou details the author’s own personal experiences within this system of belief and ritual, along with descriptions and experiences of other people, ranging from those who reject it entirely to ardent practitioners and leaders. Davis also places voudou in a broad context of American cultural history, from slavery to the Civil Rights Movement, and from Elvis to New Age.

Current interest in voudou is related, in part, to the arrival of large numbers of people into the United States from the Caribbean, especially Cuba. Blacks in that country were able to maintain the African religion in a syncretic form, known as santeria. The tensions that have arisen between Cubans and African Americans over both the leadership and the belief system of the religion is discussed.

Davis raises questions and offers insight into the nature of religion, American culture, and race relations. The book contains an extensive bibliography for further reading and a glossary of voudou terms for readers unfamiliar with the subject.

American Voudou: Journey into a Hidden World is a recommended text for use in classrooms where the following subjects are being studied: Cultural Studies and Folklore.

A fascinating and insightful account of a little known and often misunderstood aspect of African-American culture, American Voudou details the author’s own personal experiences within this system of belief and ritual, along with descriptions and experiences of other people, ranging from those who reject it entirely to ardent practitioners and leaders. Davis raises questions and offers insight into the nature of religion, American culture, and race relations. Library Journal called it “engagingly written.”

[“University of Tulane for "History of Voudou"”]

ROD DAVIS is an award-winning journalist and magazine editor who has taught writing at the University of Texas at Austin and Southern Methodist University in Dallas. A fifth-generation Texan, he has lived most of his life in Texas and the South, currently residing in Birmingham, Alabama.