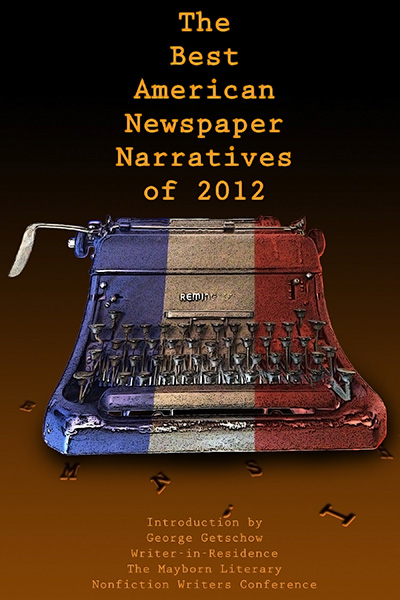 The Best American Newspaper Narratives of 2012

About Getschow's The Best American Newspaper Narratives of 2012

This anthology collects the ten winners of the 2012 Best American Newspaper Narrative Writing Contest at the Mayborn Literary Nonfiction Conference, which is hosted by the Frank W. Mayborn Graduate Institute of Journalism at the University of North Texas. The contest honors exemplary narrative work and encourages narrative nonfiction storytelling at newspapers across the United States.

First place winner: Eli Saslow,”Life of a Salesman,” published by the Washington Post, is about a Manassas, Va., swimming pool salesman experiencing the unraveling of his decades-long success story.

Second place: Kelley Benham, “Never Let Go,” published by the Tampa Bay Times, is her personal account of the months following the birth of her premature daughter.

Third place: Anne Hull, “Breaking Free,” published by the Washington Post, traces a teenage girl’s climb out of poverty as she prepares for college.

GEORGE GETSCHOW teaches in the University of North Texas’s Mayborn School of Journalism and is the writer-in-residence for the Mayborn Literary Nonfiction Conference. He was a reporter at the Wall Street Journal bureau in Chicago and also chief of the Dallas and Houston bureaus. Getschow was a finalist for the Pulitzer Prize.

The Best American Newspaper Narratives of 2012