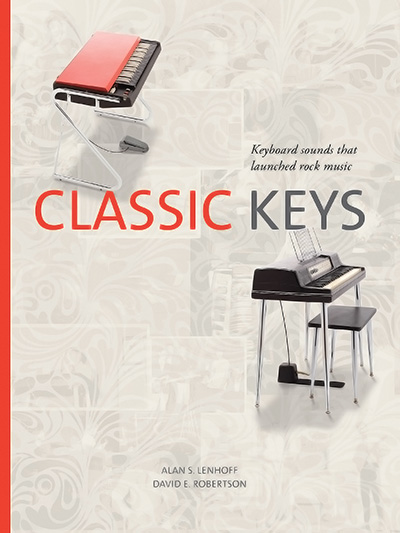 About Lenhoff and Robertson's Classic Keys

Classic Keys is a beautifully photographed and illustrated book focusing on the signature rock keyboard sounds of the 1950s to the early 1980s. It celebrates the Hammond B-3 organ, Rhodes and Wurlitzer electric pianos, the Vox Continental and Farfisa combo organs, the Hohner Clavinet, the Mellotron, the Minimoog and other famous and collectable instruments.

From the earliest days of rock music, the role of keyboards has grown dramatically. Advancements in electronics created a crescendo of musical invention. In the thirty short years between 1950 and 1980, the rock keyboard went from being whatever down-on-its-luck piano awaited a band in a bar or concert hall to a portable digital orchestra. It made keyboards a centerpiece of the sound of many top rock bands, and a handful of them became icons of both sound and design. Their sounds live on: Digitally, in the memory chips of modern keyboards, and in their original form thanks to a growing group of musicians and collectors of many ages and nationalities.

Classic Keys explores the sound, lore, and technology of these iconic instruments, including their place in the historical development of keyboard instruments, music, and the international keyboard instrument industry. Twelve significant instruments are presented as the chapter foundations, together with information about and comparisons with more than thirty-six others. Included are short profiles of modern musicians, composers, and others who collect, use, and prize these instruments years after they went out of production.

Both authors are avid musicians, collect and restore vintage keyboards, and are well-known and respected in the international community of web forums devoted to these instruments.

ALAN LENHOFF has been a writer, editor, and executive for major U.S. newspapers, and a magazine publisher. He lives in Birmingham, Michigan.

DAVID ROBERTSON is an industrial designer, commercial photographer, and design historian from Adelaide, Australia. He is a member of the Order of Australia for services to professional design.