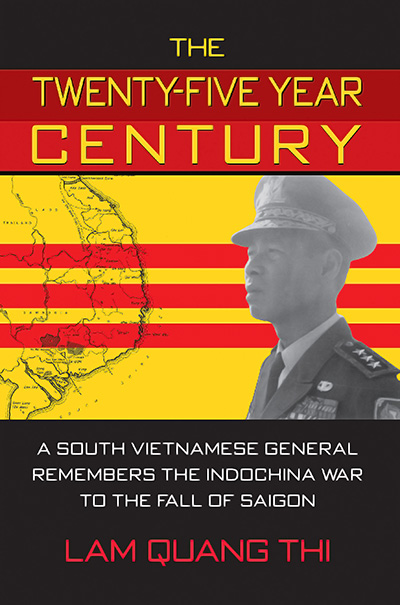 The Twenty-five Year Century: A South Vietnamese General Remembers the Indochina War to the Fall of Saigon

About Thi's The Twenty-five Year Century

For Victor Hugo, the nineteenth century could be remembered by only its first two years, which established peace in Europe and France’s supremacy on the continent. For General Lam Quang Thi, the twentieth century had only twenty-five years: from 1950 to 1975, during which the Republic of Vietnam and its Army grew up and collapsed with the fall of Saigon. This is the story of those twenty-five years.

General Thi fought in the Indochina War as a battery commander on the side of the French. When Viet Minh aggression began after the Geneva Accords, he served in the nascent Vietnamese National Army, and his career covers this army’s entire lifespan. He was deputy commander of the 7th Infantry Division, and in 1965 he assumed command of the 9th Infantry Division. In 1966, at the age of thirty-three, he became one of the youngest generals in the Vietnamese Army. He participated in the Tet Offensive before being removed from the front lines for political reasons. When North Vietnam launched the 1972 Great Offensive, he was brought back to the field and eventually promoted to commander of an Army Corps Task Force along the Demilitarized Zone. With the fall of Saigon, he left Vietnam and emigrated to the United States.

Like his tactics during battle, General Thi pulls no punches in his denunciation of the various regimes of the Republic, and complacency and arrogance toward Vietnam in the policies of both France and the United States. Without lapsing into bitterness, this is finally a tribute to the soldiers who fell on behalf of a good cause.

“General Lam Quang Thi is respected among his countrymen, his soldiers, and his American counterparts. The Twenty-five Year Century reflects the experience of the brave men and women who served in the Army of the Republic of Vietnam. It is the genuine voice of those who fought for freedom.” —Yung Krall, author of A Thousand Tears Falling

“Readers will find in this book a new perspective on the War in Vietnam from one who helped to create and shape the history. His story—the story of the Republic of Vietnam from the eyes of those in the Republic—has been long neglected by historians of the period.” —Ron Frankum, The Vietnam Archive, Texas Tech University

“The Twenty-five Year Century is extremely interesting and most professionally written. It provides a rare and most valuable insight into the war from the perspective of a senior field commander fighting it. It is a major contribution to the literature of the Vietnam conflict, and fills a void in the war’s recorded history that can only be filled by the experiences of someone of Thi’s rank and stature.” —Col. Edward P. Metzner, U.S. Army (ret.), author of More Than a Soldier’s War

”[Thi] strongly counters the prevailing ‘American’ view that the Republic of Vietnam’s government and military were hopelessly corrupt and ineffective. Not everyone will agree with General Thi’s viewpoint, but everyone will have to factor it into his own analysis of the Vietnam War.” —John Carroll, Regents Professor of History, Lamar University

”[H]is narrative is a stunning portrayal of the gradual collapse of South Vietnam… replete with tales of heroism, treachery, and political intrigue and corruption… . [T]his is a must-read book.” —Proceedings

”[A] vivid, first-hand account… . Thi is also brutally frank in his assessment of South Vietnam’s fall, but he does not fall into the ‘how we might have won’ syndrome. He lays part of the blame on America’s failure to provide promised support, but he also acknowledges South Vietnam’s shortcomings, which contributed to the defeat.” —Military Review

The Twenty-five Year Century: A South Vietnamese General Remembers the Indochina War to the Fall of Saigon is a recommended text for use in classrooms where the following subjects are being studied: History, Military.

General Thi fought for twenty-five years in Vietnam until Saigon fell in 1975, serving with the Vietnamese National Army and commanding the Army Corps Task Force along the Demilitarized Zone. Here he provides a rare and valuable insight into the Vietnam War. “Thi strongly counters the prevailing ‘American’ view that the Republic of Vietnam’s government and military were hopelessly corrupt and ineffective. Not everyone will agree with General Thi’s viewpoint, but everyone will have to factor it into his own analysis of the Vietnam War.”—John Carroll, Lamar University

[“University of Washington for "The Vietnam Wars"”]

LAM QUANG THI a general in the ARVN, is the author of [Hell in An Loc: The 1972 Easter Invasion and the Battle That Saved South Viet Nam][], also published by UNT Press. He lives in Fremont, California.

LAM QUANG THI was born in the South Vietnamese province of Bac Lieu and graduated from the VN Military Academy, the French Artillery School, the U.S. Artillery and Guided Missiles School, the U.S. Special Warfare School, and the U.S. Command & General Staff College. He was awarded the Vietnamese National Order, 3rd Degree, the Vietnamese Gallantry Cross with seventeen combat citations, the U.S. Legion of Merit, and the Korean Order of Chung Mu. Thi holds a French Baccalaureate Degree in Philosophy and an MBA from Golden Gate University in San Francisco. He is the author of [The Twenty-five Year Century: A South Vietnamese General Remembers the Indochina War to the Fall of Saigon][], published by the University of North Texas Press. He lives in Fremont, California.

[Hell in An Loc: The 1972 Easter Invasion and the Battle That Saved South Viet Nam]: /catalog/3119 [The Twenty-five Year Century: A South Vietnamese General Remembers the Indochina War to the Fall of Saigon]: /catalog/3191

The Twenty-five Year Century: A South Vietnamese General Remembers the Indochina War to the Fall of Saigon