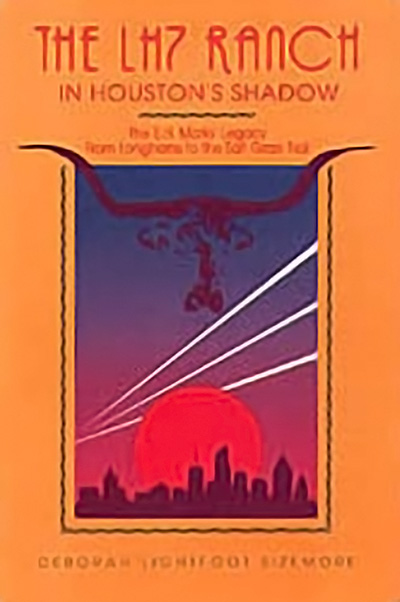 The LH7 Ranch in Houston's Shadow: The E. H. Marks' Legacy from Longhorns to the Salt Grass Trail

About Sizemore's The LH7 Ranch in Houston's Shadow

The LH7 Ranch in Houston’s Shadow: The E.H. Marks’ Legacy From Longhorns to the Salt Grass Trail is now available as a free e-book at the UNT Digital Library and The Portal to Texas History.

“I lived in the days when Texas was young. I followed the chuckwagon and rode bucking horses from ranch to ranch. But that was in those early days, in the nineties, when I was young.” —E. H. Marks

The story of Emil Henry Marks and the LH7 Ranch he founded records not only the history of a unique family but also tells something of the cattle business on the coastal prairies of Texas when ranching was the principal industry of the region, before Houston became a major metropolitan center and industry became king. It also chronicles the beginning of the Salt Grass Trail, one of Houston’s most enduring traditions.

Marks registered the LH7 brand in Harris County in 1898 and started the ranch with 63 acres of grass west of Houston and a few Longhorn cattle. By the early 1930s the LH7 was running 6,670 head on 36,000 acres. The city’s shadow loomed over the LH7 in the 1940s and 1950s, and eventually a big bite of the ranch was condemned to protect booming Houston from flooding along Buffalo Bayou. At age seventy, Marks made the first Salt Grass Trail ride in January, 1952, which is reenacted each February to kick off the Houston Livestock Show and Rodeo.

DEBORAH LIGHTFOOT SIZEMORE writes about Western history and Texas business for magazines and for corporate clients. The granddaughter of a turn-of-the-century Panhandle-South Plains cowboy, she lives and works in the country south of Fort Worth.

The LH7 Ranch in Houston's Shadow: The E. H. Marks' Legacy from Longhorns to the Salt Grass Trail