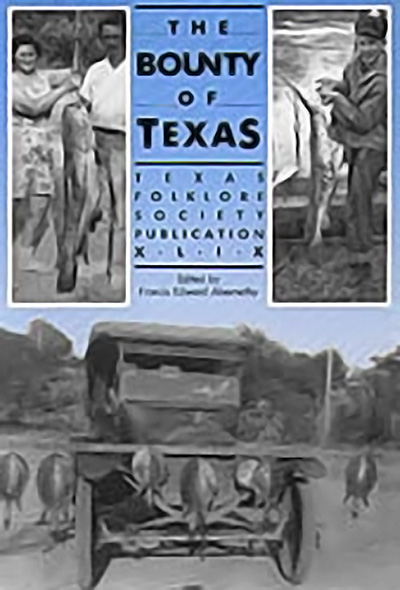 About Abernethy's The Bounty of Texas

The Bounty of Texas is now available as a free e-book at the UNT Digital Library and The Portal to Texas History.

In addition to reminiscences of trapping and hunting in the Big Bend of West Texas during the 1920s and 1930s, this publication includes a heretofore unpublished outdoors sketch by J. Frank Dobie on deer hunting and a piece by Bertha McKee Dobie on Frank’s interest in grasses. Paul Clois Stone disagrees with Larry McMurtry’s contention that Dobie’s audience is “composed primarily of middle-aged nostalgics,” and that Dobie’s work “will not outlive him by more than a generation.” From Stone’s perspective on the Yale scene, “Dobie’s importance in the formal national academic community has grown since 1964 and… it will continue growing in the twenty-five years to come.”

Elmer Kelton, Joyce Roach, and Robert Flynn take a humorous look at their work and hometowns, which Kenneth Davis tells tales of souls departing their bodies. There are essays on the bounty of the tables of the earlier settlers, and the state’s ethnic heritages through the German Volksfest in Brenham. The folk-song scholarship of Dorothy Scarborough, the art of Ben Mead, a look at prison language, and much more are included in this bountiful book.

“…one of the finest volumes ever produced by the Folklore Society.” —Southwestern Historical Quarterly

“Another amazing collection of the fruitful interests of the Texas Folklore Society.” —Western American Literature

“Skeptics of all stripes need only investigate the essays in this excellent collection, because nearly all contribute significantly to our understanding of the land and its people.” —Dallas Morning News

“I always look forward to receiving the latest book in the Texas Folklore Society’s… series… because I know that inside I’ll find entertaining, enlightening essays that recall days gone by or celebrate traditions all Texans need to remember.” —San Antonio Express-News

Hardcover (February 1991) according to Amazon.