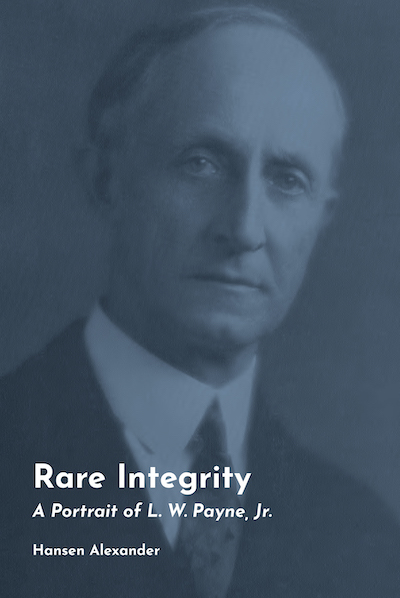 Leonidas Warren Payne, Jr. (1873-1945), counted Robert Frost among his friends and a member of the inner circle of poets who embraced him and sought his advice. He altered forever the perception of Texas when he created the Texas Folklore Society that continues to record, publish, and promote Texas history, myth, music, and customs. He guided J. Frank Dobie back into The University of Texas fold, where Dobie produced his finest work and established a voice for Texas literature. L. W. Payne, Jr., influenced generations of American school children through his anthologies that became basic English textbooks.

Drawing upon Payne’s own writing, interviews with former colleagues and students, and private letters lain undisclosed since Payne’s death, Rare Integrity reveals a portrait of a man whose great gift of creative generosity and warmth of heart enabled him to see a person as the person wished to be seen.

HANSEN ALEXANDER, an attorney for many years in New York City, was a history major at The University of Texas when he began researching and writing about Payne. He is the author of two books about Texas baseball legend Roger Clemens, One Brave Man and The Life and Trials of Roger Clemens.