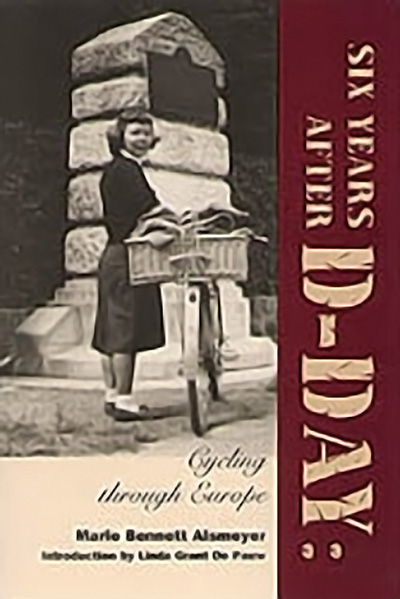 About Alsmeyer's Six Years After D-Day

In 1950, a young couple (both WWII veterans—a WAVE and an airman—and both with GI Bill journalism degrees) quit their jobs on a South Texas weekly newspaper and embarked upon a 1200-mile bicycle tour through Europe.

“Such a trip made no sense at all in 1950,” writes Alsmeyer, “but it was a gloriously crazy, senseless thing to do.” Based on notes, diaries, and letters, the book is more than a mere travelogue. It chronicles the people and places of postwar western Europe—including the citizens of Vimoutiers, France, a town accidentally bombed by Americans.

“One family with twelve children lived in one of the houses that fell during the first wave of the raid. The children crouched under a sturdy dining room table until the last of the bombs had hit. As rescuers went about their tasks in the smoldering debris, these twelve children—in single file—walked out of the rubble, hand in hand. They said that only the night before, their father had warned them that if there was ever a bombing raid, they must hide under the sturdy round table.”

Bicycle enthusiasts, war historians, sociologists, women’s studies scholars, and readers of travel narratives will all find something of interest in this charmingly written narrative.

“Filled with original journal entries, this is an enchanting travelogue filled with charming characters, sly wit and sobering portraits of postwar Europe. While Hank’s ‘guide books and… maps were vital to his enjoyment’ of the… European adventure, the contemporary reader will need nothing more than a well-lighted armchair.” —Publisher’s Weekly

Introduction by Linda G. DePauw, editor and publisher of MINERVA, Quarterly Report on Women and the Military.

MARIE BENNETT ALSMEYER served as a pharmacist’s mate in the Navy WAVES during WWII. Her previous books are The Way of the WAVES and Old WAVES Tales. She and her husband live in Tyler, Texas.