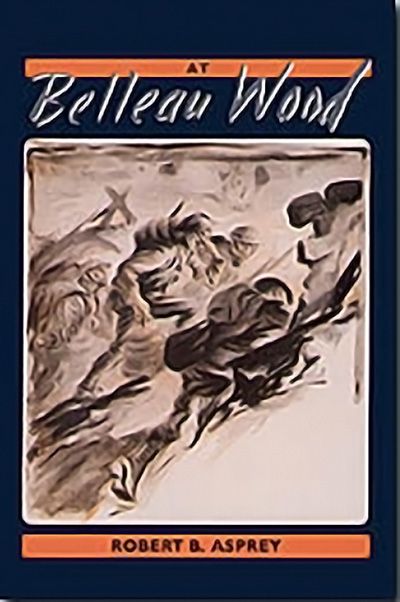 About Asprey's At Belleau Wood

“General, these are American regulars. In a hundred and fifty years they have never been beaten. They will hold.” —Colonel Preston Brown to General Degoutte, June 1,1918

“We now stood facing the dark sullen mystery of Belleau Wood… That the wood was strongly held we knew.” —Colonel Albertus Catlin “The first day I was at camp I was afraid that I was going to die. The next two weeks my sole fear was that I wasn’t going to die. And after that I knew I’d never die because I’d become so hard that nothing could kill me.” —from Kemper F. Cowing and Courtney R. Cooper, Dear Folks at Home

On June 5, 1918, the 2nd Division, made up of soldiers and marines, launched an offensive on German lines at Belleau Wood. Using sources on both sides of the Atlantic and personally interviewing many of those who fought at the wood, Asprey combines excitement with detail and accuracy in telling of this major battle of World War I. He describes the hardships, the combination of tactical ingenuity and pure guts which ultimately enabled Major Maurice Shearer to report to Brigadier General Harbord on June 26th, “Belleau Wood now U.S. Marine Corps entirely.”

Back in Print after many years—First Time in Paperback.

ROBERT B. ASPREY, Captain, U. S. Marine Corps (ret.), author of The Panther’s Feast, The First Battle of the Marne, Semper Fidelis, Frederick the Great: The Magnificent Enigma, War in the Shadows: The Guerrilla in History, and The German High Command at War: Hindenburg and Ludendorff Conduct World War I, and numerous magazine articles, was educated at the University of Iowa, Oxford University the University of Vienna and the University of Nice. Wounded on Iwo Jima, he also served in the Korean War as a captain.

More from Robert B. Asprey