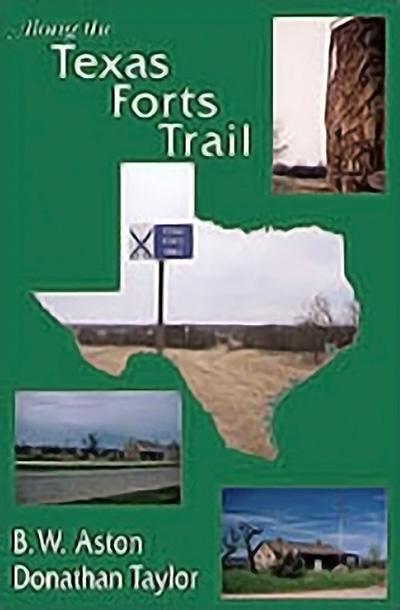 Along the Texas Forts Trail

About Aston and Taylor's Along the Texas Forts Trail

“You don’t curl up with this book—you get in your car with it and start driving… We set out one blustery March morning to trace the northernmost section of the Texas Forts Trail beginning at Jacksboro. The drive northwest from Dallas grew downright scenic once we reached Bridgeport, and soon thereafter began to reveal some of the prettiest Texas hill country north of Kerrville… Eight outposts are included in the Texas Forts Trail, one of ten Texas Travel Trails designated by the state Highway Department… It is easy to lose yourself in the excellent descriptions of frontier life-and-death in this dandy little guidebook… The spell climaxed for me at twilight when I suddenly crested a long rising curve and found myself at Fort Phantom Hill somewhere north of Abilene. Sixteen crumbling limestone chimneys, standing like the remains of an ancient Druid shrine, caught the last golden light of a day I’ll long remember. The day I discovered that history can be fun. And you can too. All you need is a copy of Along Texas Forts Trail, a covered wagon, and a dependable team—uhm, make that a station wagon and a full tank of gas.” —R. H. Stewart Mitchell, Texas Books in Review

The task of providing military defense for the Texas Frontier was never an easy one because the territory was claimed by some of the greatest querrilla fighters of all times—the Comanches, Kiowas, Apaches, and Lipans. Protecting a line running from the Red River southwest to El Paso was an impossible task, but following the Mexican War the federal government attempted to do so by establishing a line of forts.

During the Civil War the forts were virtually abandoned and the Indians once again ruled the area. Following the war when the military began to restore the old forts, they found that the Indians no longer fought with bows and arrows but shouldered the latest firearms. With their new weapons the Indians were able to inflict tremendous destruction, bringing demands from settlers for more protection. In the summer of 1866 a new line of forts appeared through central Texas under the leadership of General Philip H. Sheridan, commander of federal forces in Louisiana and Texas.

Guardians of a raw young land and focal points of high adventure, the old forts were indispensable in their day of service and it is fitting that they be preserved. In and around the forts and along the route of the Texas Forts Trail, history is abundant and enduring.

Historian Rupert Richardson first wrote the travel guide of the fort locations for the Texas Highway Department. B. W. Aston and Donathan Taylor took the original version and revised and expanded it, giving additional historical information on the forts and their role in frontier defense, making this a valuable historical resource as well as a travel guide to the forts and surrounding towns.

B.W. ASTON was chairman of the History Department and director of the Rupert N. Richardson Research Center at Hardin-Simmons University.

DONATHAN TAYLOR is Associate Professor of History at Hardin-Simmons University.

Along the Texas Forts Trail