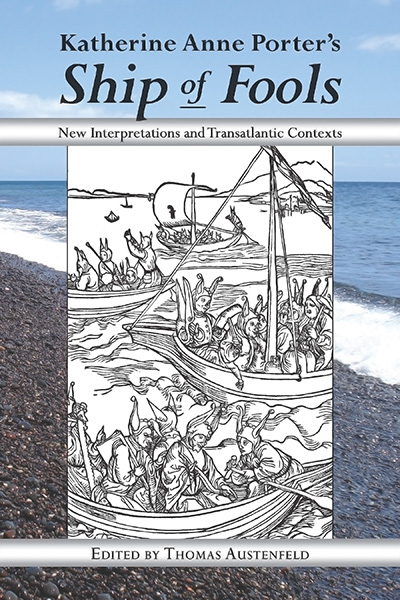 Containing pieces by distinguished scholars including Darlene Harbour Unrue and Robert Brinkmeyer, this book is the first full investigation of the links between Porter’s only novel and European intellectual history. Beginning with Sebastian Brant, author of the late medieval Narrenschiff, whom she acknowledges in her Preface to Ship of Fools, Porter’s image of Europe emerges as more complex, more knowledgeable, and more politically nuanced than previous critics have acknowledged. Ship of Fools is in conversation with Europe’s humanistic tradition as well as with the political moments of 1931 and 1962, the years that elapsed from the novel’s conception to its completion.

“Unlike Porter’s short stories, her only novel has not received the sustained critical attention it deserves. Being the only of its kind and representing much original thinking, research, and new approaches, Austenfeld’s edition fulfills this lack of scholarship.” –—Christine Grogan, president Katherine Anne Porter Society

“In the field of Porter studies, this work will rank of great significance.” –—Linda Kornasky, Angelo State University

“Thomas Austenfeld’s studies of American women fiction writers was good preparation for editing a volume of essays on Porter’s Ship of Fools. Long overdue, this book’s astute and finely written essays examine the European philosophical and artistic antecedents of Porter’s novel and connect it to her experience as an American woman modernist. Insufficiently appreciated when it appeared, Ship of Fools is likely now to be accorded the sort of admiration that routinely goes to Céline, Thomas Bernhard, and Michel Houellebecq. This collection performs an important service for literature.” —Alfred Corn, author of Miranda’s Book

THOMAS AUSTENFELD was born in Germany and educated at the Universities of Münster and Virginia. He is currently Professor of American Literature at the University of Fribourg, Switzerland. Austenfeld is the author of American Women Writers and the Nazis, the editor of Kay Boyle for the Twenty-First Century, and the co-editor of Writing American Women and Terrorism and Narrative Practice.