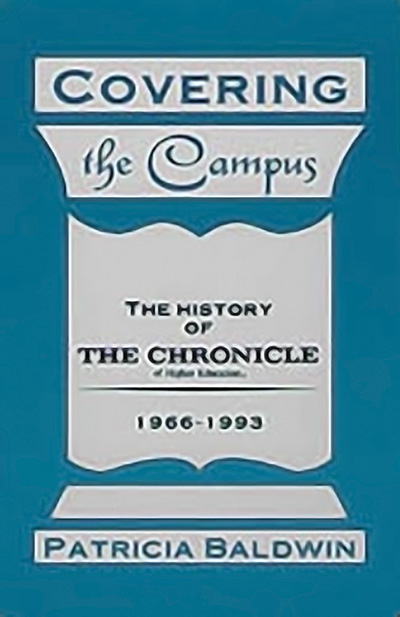 Covering the Campus: The History of The Chronicle of Higher Education

About Baldwin's Covering the Campus

“This account of the near meteoric rise of the Chronicle adds to… the body of knowledge that produces a history of news publications. The material… taken largely from interviews with the founders and editors of the Chronicle … is original and fresh… remarkable that Pat was able to reach as far into the history as she did.” —Robert C. Jeffrey, Media Studies Center, Columbia University

As the newspaper gained its editorial footing, Vietnam War protests were gaining momentum nationwide, placing one of journalism’s most dramatic contemporary reporting challenges on college and university campuses. Over its two-and-a-half decades-plus, The Chronicle has been at Kent State, Tiananmen Square, and presidential inaugurations.

The newspaper has discussed many issues in the higher education community, including leadership, campus race relations, gender-equity, multiculturalism, and AIDS. It has led journalism’s investigations into such serious subjects as college athletics scandals, as well as infusing lighter and artistic touches into its pages with such features as “Marginalia” and “End Paper.” The “Bulletin Board” classified section has become recognized as the international job marketplace for higher education.

Covering the Campus records the establishment of The Chronicle; the development of its newsgathering, advertising, and marketing operations; contributions of key personnel; editorial philosophy; overview of the coverage of the major issues in higher education; the publication’s potential future roles in communications.

Covering the Campus: The History of The Chronicle of Higher Education