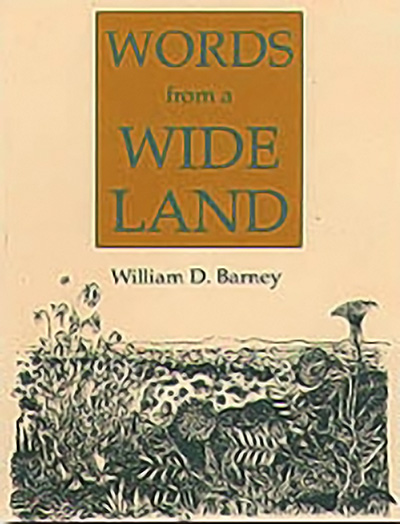 Words from a Wide Land

About Barney's Words from a Wide Land

If you enjoyed books like A Sand County Almanac or A Pilgrim at Tinker’s Creek, you’ll love Words from a Wide Land. Barney brings insights of people and places, natural phenomena, birds, animals, insects, and other things he has encountered in many years of living and traveling.

In these entries (a year’s worth, though not in chronological order by year), can be found humor, romance, delight, philosophy, even terror. He has measured the life about him with a flair, which at times bursts into poetry.

“September 6, 1977—The migration of birds resembles Pickett’s Charge. Thousands are lost in frontal collisions with skyscrapers, are picked off by rough predators, buffeted by wind and storm. But they keep coming on, advancing, year after year, as if there were no Cemetery Ridge.”

“May 12, 1967—The Swainson thrush has been fluting his little strangled bugle call from the red mulberry tree now several days. It is much like the wood thrush’s call in quality, but reduced in an echo chamber, to a mere whisper. Still, it is an unmistakable signature of one week in May, which I have hardly heard at any other time.”

“…neither a journal, an almanac, a narrative nor a collection of poems… the observations are united by a plain-spoken, sometimes earthy style, and by attention to the subtle details of a particular scene… nature is… an everyday companion represented in the icicles that clog a garden hose, in the moles that plague the garden, and in the thunderstorm that disrupts a Fourth-of-July outing.” —Western American Literature

“The style often conveys the feeling of John Graves’ reflections as he eased down the Brazos River with his dog in a canoe, or of C. S. Lewis as he mused… on nature and philosophy… An alive and vibrant wash of encounters with man, beast and nature that… is a pleasure to visit.” —Fort Worth Star-Telegram

“In reading Barney’s half-century of thoughts, one is rewarded with new faith that gentility and civility are not dead and that works of wise beauty still exist… a masterpiece of mildness raging against all excess and self-indulgence.” —Dallas Morning News

WILLIAM D. BARNEY was president of the Poetry Society of Texas and a member of the Poetry Society of America. He won two Texas Institute of Letters Awards as well as the Robert Frost Memorial Award for a narrative poem, accepting the award from Frost himself in 1962. In 1982 he was appointed Poet Laureate of Texas. He published six books of poetry.

Words from a Wide Land