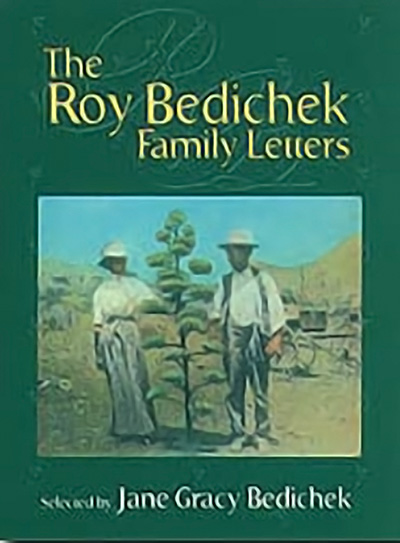 The Roy Bedichek Family Letters is now available as a free e-book at the UNT Digital Library and The Portal to Texas History.

“I’ve got the book beside my bed. I dip into it regularly, just to see what Bedichek had to say about Greek myths, Gandhi, racism, mockingbirds, or dogs.” —The Daily News (Galveston)

Roy Bedichek, author of Adventures with a Texas Naturalist and close friend of J. Frank Dobie and Walter Prescott Webb, loved both reading and writing letters. His often expressed wish that more letters and journals would be published has been brought to bear on his own work by his daughter-in-law, Jane Gracy Bedichek, who offers a selection of the Bedichek family correspondences.

The collection shows once again what talent Bedichek had for describing the world around him, and for expressing his opinion of that world, but they also reveal his interest and involvement in his children’s lives and his sense of humor in dealing with them, with his pets, and with the wildlife he became famous for observing. Always the letters are rare vintage Bedichek.

“Evidence accumulates against the blue jay. This morning… I saw a jay deviling a young martin sitting on a telephone wire… One killed a baby inca; I suspect one of the death of one of my screech owls; one stole the rag-strips I had prepared with great pains to tie up my tomato-vines with; and this morning I found almost half of a large green tomato eaten away and can think of no other bird which would commit such an atrocity. And yet he is a proud, gay, gorgeously colored creature whose arrogance becomes him. But I have a temper: he’d better not let me catch him killing a baby inca.” —letter to Lillian Bedichek, June 18, 1949

“We saw five magnificent white pelicans, scooping with their enormous bills and throwing their heads up now and then, exhibiting their pale yellow pouches. Immediately behind them walking in solemn procession, like Egyptian priests performing some ancient rite, were seven (mystic number) wood ibises, with their bills plunged into the water up to their eyes, treading along without raising their bills for five minutes at a time. Flanking this procession on either side were several… roseate spoonbills, in full mating plumage… this procession went forward in the glow of the rising sun, and it is hard for me to believe that it wasn’t some kind of solemn religious pageant.” —letter to daughter Sarah Bedichek, July 8, 1937

JANE GRACY BEDICHEK, a graduate of Wellesley College and Columbia School of Social Work, currently serves on the board of Scarsdale Audubon and Weinberg Nature Center and is active in the Archaeological Institute of America.