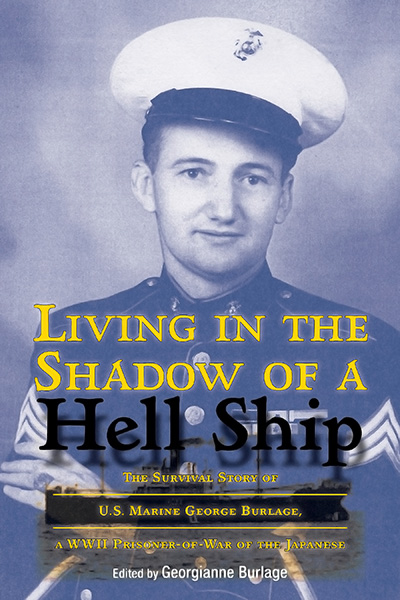 About Burlage's Living in the Shadow of a Hell Ship

U.S. Marine George Burlage was part of the largest surrender in American history at Bataan and Corregidor in the spring of 1942, where the Japanese captured more than 85,000 troops. More than forty percent would not survive World War II. His prisoner-of-war ordeal began at Cabanatuan near Manila, where the death rate in the early months of World War II was fifty men a day. Sensing that Cabanatuan was a death trap, he managed to get transferred to the isolated island of Palawan to help build an airfield for his captors.

Malaria and other tropical diseases caused him to be sent to Manila for treatment in 1943 (a year later, 139 of his fellow POWs were massacred on Palawan). After another year of building airfields, Burlage survived a 38-day voyage in the hull of a Japanese hell ship and ended the war as a miner for Mitsubishi in northern Japan. By sheer luck, strength, and a bit of sabotage, he survived and was freed in September 1945 after the Japanese surrendered. He had endured starvation and torture and lost half of his prewar weight, but no one had killed him.

After the war Burlage became a journalist and wrote about his POW experiences. His daughter Georgianne discovered his writings after George passed away in 2008, and edited them with additional historical material to provide context for his World War II experiences in the Pacific.

GEORGIANNE BURLAGE, daughter of George Burlage, is a fifth-generation Texan and teacher of secondary history and journalism for more than thirty years. She is a national officer of the American Defenders of Bataan and Corregidor Memorial Society, and lives in Denton, Texas.