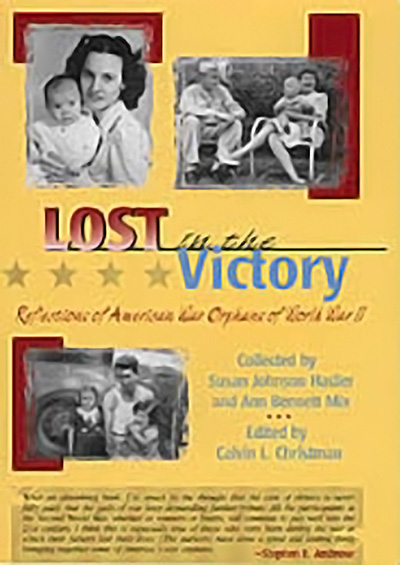 Lost in the Victory: Reflections of American War Orphans of World War II

About Christman's Lost in the Victory

“A book has been published which should be mandatory reading on Memorial Day… If you have any idea of observing Memorial Day, Lost in the Victory will help you through it. And if you never really cared why you got a Monday off in May, you ought to grab your conscience and read the book. Published by the University of North Texas Press of Denton, Texas, it is reading that will tug at your heart, your emotions—and perhaps, just perhaps, will change forever the way you look at Memorial Day. It’s not to celebrate but to reflect.” —New York Times News Service

“Don’t start this book, filled with narratives and scrapbook photos that bring the people to vivid life, without a big box of tissues at your side; the stories are brutally honest but never maudlin.” —Judyth Rigler, San Antonio Express-News

“This reviewer has read many books over the course of a professional career, but few have had the emotional impact of this one. Why, I’m not sure. Describing the content and style of the book is not easy because in places it reads like a sociological study, in others more like psychological case studies, in others like a trip down Memory Lane or a series of mini-love stories. The range of emotions that the work elicits is surprising. One minute you are smiling or laughing, and the next you can feel the tears in your eyes. Perhaps it touched me, as it likely will many other Americans born between 1930 and 1945 whose fathers marched off to war and returned, because it causes us to reflect on what our lives might have been like if our fathers had not come back.” —Keith McFarland, Dallas Morning News

In 1990, Ann Mix began her search to find out about her father who had been killed in World War II. She discovered that, of the servicemen who died in that war, 183,000 were fathers. During her search, Mix met others whose fathers had been killed and few of them had much information about their fathers. As a result, Ann founded the American WWII Orphans Network to locate war orphans and become a depository for sources of information about WWII servicemen who were fathers. Senator Robert Dole, who had fought in the 10th Mountain Division with Mix’s father, assisted the network as a National Advisor until 1995, helping it to become a true humanitarian organization.

War orphan Susan Johnson Hadler, a psychologist, began a collaboration with Ann to collect the stories of the orphans when she discovered there were no statistics on the number of children and no studies on the effects of their fathers’ deaths on their lives. Records which could have helped sociologists, psychologists, and historians were simply nonexistent.

Mix and Hadler began to interview war orphans, who nearly all reported having felt the awkwardness with which America treated the subject of their fathers. At a young age, they had learned to keep quiet, and only with great reticence are they able now to discuss their loss and its impact on their lives. Publication of these stories breaks a longstanding silence.

The voices in this book belong to sons and daughters who for half a century have seldom spoken of their fathers or of their own lives after the deaths of their fathers. The memories revealed through interviews, letters, family histories and remembrances of their fathers’ war buddies are remarkable for their honesty and their quiet courage.

“For most Americans, the postwar era was a time of prosperity. Houses were built with government loans, and veterans were educated on the GI Bill… However, sprinkled throughout America were those who had lost a son, a brother, an uncle or a friend. There were women who had lost husbands and children who had lost fathers.” —from the Introduction

Lost in the Victory: Reflections of American War Orphans of World War II