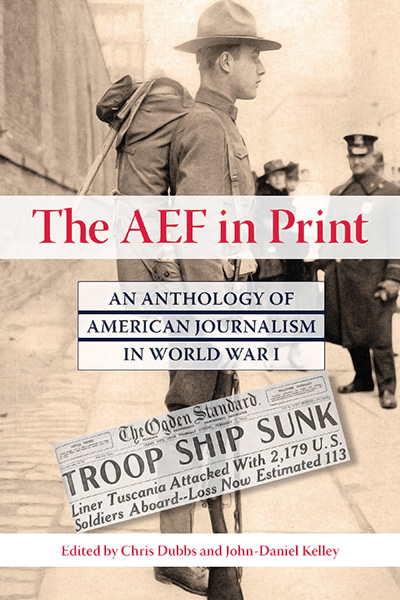 The AEF in Print: An Anthology of American Journalism in World War I

About Dubbs and Kelley's The AEF in Print

The AEF in Print is an anthology that tells the story of U.S. involvement in World War I through newspaper and magazine articles—precisely how the American public experienced the Great War. From April 1917 to November 1918, Americans followed the war in their local newspapers and popular magazines. The book’s chapters are organized chronologically: Mobilization, Arrival in Europe, Learning to Fight, American Firsts, Battles, and the Armistice. Also included are topical chapters, such as At Sea, In the Air, In the Trenches, Wounded Warriors, and Heroes.

“Some of these stories are real gems. Irving Cobb’s account of the sinking of the SS Tuscania, for example, is absolutely riveting, and the same can be said of William Shepherd’s description of life aboard US Navy destroyers in the Atlantic, Floyd Gibbons’s narration of his wounding at Belleau Wood, and George Pattullo’s roll-out of the Sergeant York legend.” —–Steven Trout, author of On the Battlefield of Memory: The First World War and American Remembrance

“The well-written and evocative articles bring the war to life.” —–Jennifer Keene, author of Doughboys, the Great War, and the Remaking of America

The AEF in Print: An Anthology of American Journalism in World War I