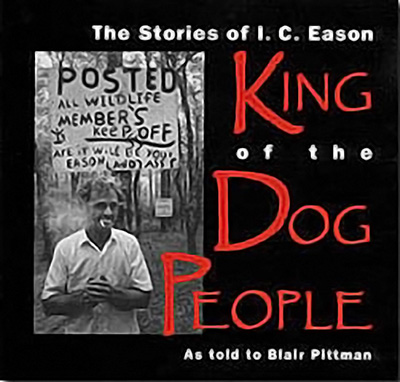 The Stories of I. C. Eason, King of the Dog People

About Eason and Pittman's The Stories of I. C. Eason, King of the Dog People

“…you’ve got a little jewel here. Pittman did an excellent job going from the oral history—the telling of the tales—to the written page. I don’t think I’ve seen better… These are fine stories that truly catch the feel of the Neches bottoms and the Dog People.” —Francis Edward Abernethy, Editor, Texas Folklore Society

Few people lived in the Neches River bottom as late as 1970. Man was noticeable only in the occasional cabin or lean-to hunting camps built on the higher river bank ground. Some of these camps belonged to locals known as the Dog People because of their hunting methods—handed down by their ancestors who had found this wilderness shortly before the Civil War—using a local-bred dog called a cur. The dog was bred for bravery, endurance, and devotion and would run its quarry until it bayed or turned back so the hunter could kill it. This type of hunting—not to be confused with sport—was a method of survival that often prevented starvation for families during the Depression years.

I. C. Eason grew up in those lean times. His oral stories of generations of Dog People come from around the campfire, from the fishing boat, in front of a pot bellied stove. In the 1970s, I. C. Eason made the decision to prove ownership to his land, which, along with most river bottom land, had never had a deed filed on it. With a lawyer he took on the big companies who wanted to cut the timber, drill for oil, lay pipelines and put up miles of power lines. All of a sudden he was in the middle of a big battle, and he soon became known as “The King of the Dog People.”

“I ain’t got nothin’—what I’ve got I’m sittin’ on it. This is my whole life. It’s mine, and nobody’s gonna take it from me, not as long as I draw breath and gun-powder burns.” —I. C. Eason

More from I. C. Eason

Award-winning photographer BLAIR PITTMAN has also written The Earth Book and The Natural World of the Texas Big Thicket in addition to being a contributing photographer to American Heritage, Forbes, National Geographic Magazine, Smithsonian, Time-Life Books, and Texas Highways.

The Stories of I. C. Eason, King of the Dog People