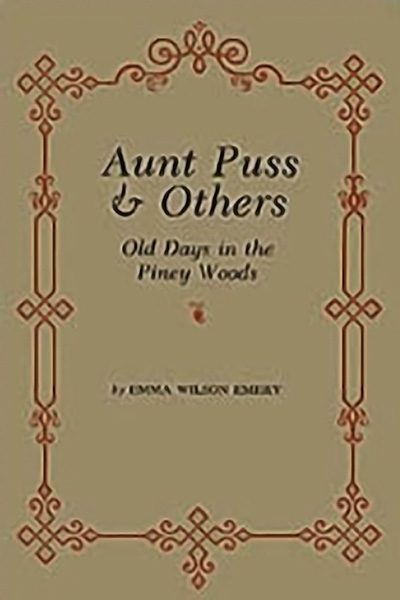 Aunt Puss and Others: Old Days in the Piney Woods

About Emery's Aunt Puss and Others

Aunt Puss & Others: Old Days in the Piney Woods is now available as a free e-book at the UNT Digital Library and The Portal to Texas History.

“In 1890, Aunt Puss Hooks, Spurger’s outstanding citizen, was not known beyond the boundaries of Tyler County, Texas. She never saw the halls of Congress nor went shopping on Fifth Avenue, but she represented a way of life as it was lived in her day and a type of people who were among the unsung builders of our nation. Belonging to a generation that had its advent immediately following the conflict between our states, she was one of the children who had to go to the cottonfield instead of the schoolhouse… She was not a retiring, subdued woman… hers was a positive personality, the blending of a fighting spirit with an unselfish, gentle nature that filled her critics with awe and her friends with love and admiration… To me, as a child, Aunt Puss was a three ring circus all by herself… Despite all their shortcomings and oddities, Aunt Puss, her friends, and her kinfolk made up a lovable, God-fearing aggregation of human beings, a people whose roots grew deep into the heart of the Southland… I am glad I was one of them.”

EMMA WILSON EMERY writes with sensitivity and humor of a childhood spent in the Big Thicket piney woods with many interesting relatives. She later lived in Nacogdoches and worked there at her first job as typesetter for the Daily Plaindealer. She graduated from nursing school in 1911 at Shreveport and later became poet laureate of Louisiana.

Aunt Puss and Others: Old Days in the Piney Woods