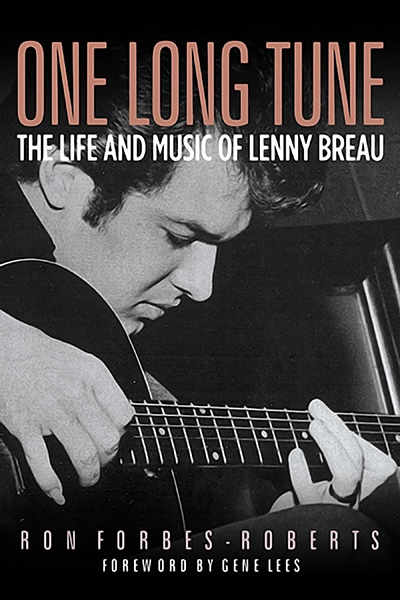 One Long Tune: The Life and Music of Lenny Breau

About Forbes-Roberts's One Long Tune

“Mr. Guitar” Chet Atkins called Lenny Breau (1941-1984) “the greatest guitarist who ever walked the face of the earth.” Breau began playing the instrument at age seven, and went on to master many styles, especially jazz. Between 1968 and 1983 he made a series of recordings that are among the most influential guitar albums of the century.

Breau’s astonishing virtuosity influenced countless performers, but unfortunately it came at the expense of his personal relationships. Despite Breau’s fascinating life story and his musical importance, no full-length biography has been published until now. Forbes-Roberts has interviewed more than 175 people and closely analyzed Breau’s recordings to reveal an enormously gifted man and the inner workings of his music.

“Lenny Breau was, and will always be, a great treasure. We need him today more than ever.” —Mundell Lowe

“In his brilliantly written and exhaustively researched biography, Forbes-Roberts gets to the essence of the creative process itself and the meaning of what it is to be an underappreciated genius.” —Bill Milkowski, author of Jaco: The Extraordinary and Tragic Life of Jaco Pastorius

“A thorough and fascinating biography, which includes a discography and analysis of Breau’s recordings.” —Toronto Globe and Mail

“Forbes-Roberts does a credible job of depicting the variables that fostered Breau’s total devotion to his instrument and subsequent descent into heroin addiction. Where Forbes-Roberts does his best work though, is in his technical explanations of Breau’s unique guitar system and his comprehensive critical analyses of the artist’s recording sessions.” —All About Jazz

“Forbes-Roberts walks the line between adulation and research, music nerd and general interest reporter, with aplomb, and most importantly delivers a very readable account of a personality most readers should find endearing (if heartbreaking), even if they’d never previously heard of Breau.” —Boston Phoenix

“The author has delivered a comprehensive, well-written book that evokes both sympathy and admiration for Breau, with painstaking documentation of his technical approach.” —The Toronto Star

The documentary Talmadge Farlow records the first meeting and subsequent musical conversation between Breau and fellow master guitarist Tal Farlow. For a glimpse at the film, see www.talfarlowfilm.com/home.htm

RON FORBES-ROBERTS is an award-winning journalist and a contributing editor to Acoustic Guitar Magazine. He is a career musician with a degree in classical guitar and lives in Vancouver, British Columbia.

One Long Tune: The Life and Music of Lenny Breau