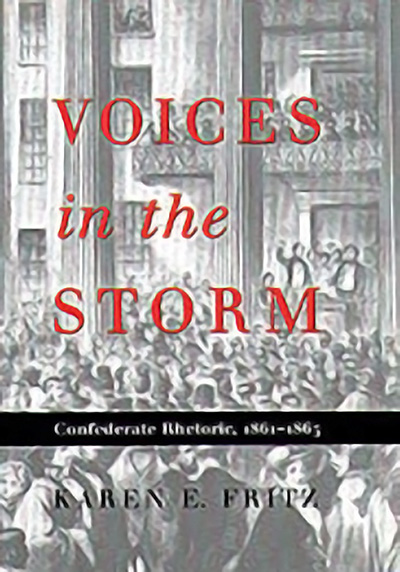 About Fritz's Voices in the Storm

“Just when one thinks that no new approach to Confederate thought is possible, along comes this work and offers one that is truly new as well as fascinating and profoundly revealing. It’s a feast for the mind, and the farther I read in it, the better I like it.” —Steven E. Woodworth, History, Texas Christian University

Voices in the Storm examines the significance of oratory in the Confederacy and also explores the nuances and subtle messages within Confederate speeches. Examining metaphor, argument, and figures of speech, Fritz finds some surprising shifts within the Civil War South. Her research indicates that four years of bloody conflict caused southerners to reconsider beliefs about their natural environment, their honor, their slaves, and their northern opponents.

Between 1861 and 1865 southerners experienced shattering calamities as they waged their unsuccessful struggle for independence. Confederate orators began the war by outlining a detailed and idealized portrait of their nation and its people. During the conflict, they gradually altered the depiction, increasingly adding references to the grotesque and discordant, as all around them southerners were losing homes and family members in the maelstrom that consumed their cities and fields, polluted their rivers, and destroyed their social order.

Oratory played a fundamental role in the southern nation, whose citizens encountered it almost daily at military functions, before battle, in church, and even while lying in hospital beds or strolling on city streets. Because Confederate citizens frequently commented on oratory or spoke out during speeches, Fritz also considers audience behavior and response.

By the end of the war, speakers described their nation in savage terms, applying to it expressions and characteristics once reserved only for the North. This analysis thus indicated that southerners listened as orators gradually shaped them and their nation into rhetorical facsimiles of their enemy, suggesting that separation at some level effected reunion.

KAREN FRITZ teaches history at Victoria College. Her degrees are from Skidmore College, the University of Virginia and Louisiana State University.