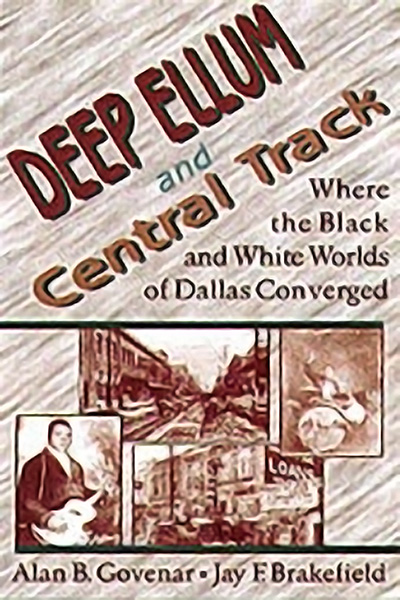 Deep Ellum and Central Track: Where the Black and White Worlds of Dallas Converged

About Govenar and Brakefield's Deep Ellum and Central Track

A mile east of the School Book Depository in downtown Dallas lies a section of the city called Deep Ellum, a mottled array of old brick structures, where wild graffiti and gaudy murals decorate the walls of trendy shops, loft apartments, restaurants, nightclubs, art galleries, and tattoo studios. The area is also home to more conventional endeavors, including a century-old meat market, auto repair shops and a sheet-metal business owned by a Holocaust survivor.

Because of the area’s long association with blues and jazz musicians, Deep Ellum has been shrouded in myth and misconceptions which obscure its actual history. Alan Govenar and Jay Brakefield—using oral histories, old newspapers and photographs, city directories and maps, as well as more traditional public records and secondary sources—reveal another side of Deep Ellum which includes Central Track (formerly called Central Avenue), an area lined with black-owned businesses which served both black and white patrons during its heyday in the 1920s and 30s.

In the Deep Ellum and Central Track areas, African Americans and whites, primarily Eastern European Jews, operated businesses from the late 19th to the mid-20th centuries, creating a unique social climate where cultural interaction took place. Much of the information in the book is presented through the stories of remarkable individuals, including professionals, pawnbrokers and other merchants, police officers, criminals, and the blues and jazz musicians who had a lasting impact on American popular music.

More from Alan B. Govenar

JAY F. BRAKEFIELD is a longtime Texas journalist, currently working at the Dallas Morning News and doing freelance writing. He lives in Irving.

Deep Ellum and Central Track: Where the Black and White Worlds of Dallas Converged