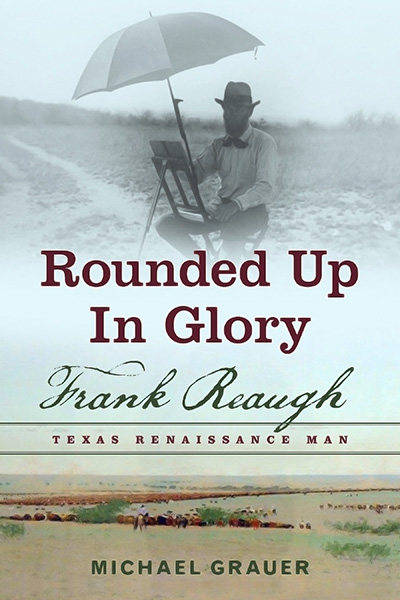 About Grauer's Rounded Up in Glory

Frank Reaugh (1860–1945; pronounced “Ray”) was called “the Dean of Texas artists” for good reason. His pastels documented the wide-open spaces of the West as they were vanishing in the late nineteenth century, and his plein air techniques influenced generations of artists. His students include a “Who’s Who” of twentieth-century Texas painters: Alexandre Hogue, Reveau Bassett, and Lucretia Coke, among others. He was an advocate of painting by observation, and encouraged his students to do the same by organizing legendary sketch trips to West Texas. Reaugh also earned the title of Renaissance man by inventing a portable easel that allowed him to paint in high winds, and developing a formula for pastels, which he marketed. A founder of the Dallas Art Society, which became the Dallas Museum of Art, Reaugh was central to Dallas and Oak Cliff artistic circles for many years until infighting and politics drove him out of fashion. He died isolated and poor in 1945.

The last decade has seen a resurgence of interest in Reaugh, through gallery shows, exhibitions, and a recent documentary. Despite his importance and this growing public profile, however, Rounded Up in Glory is the first full-length biography. Michael Grauer argues for Reaugh’s importance as more than just a “longhorn painter.” Reaugh’s works and far-reaching imagination earned him a prominent place in the Texas art pantheon.

“Certainly, there is no one more qualified than Michael Grauer to author a signal publication on this artist.” —William Reaves, founder of the Center for the Advancement and Study of Early Texas Art

MICHAEL GRAUER is the Associate Director for Curatorial Affairs/Curator of Art of the Panhandle-Plains Historical Museum in Canyon, Texas, which holds the largest public collection of Reaugh’s works. His articles on Reaugh have appeared in the American Art Review, The Pastel Journal, and the recently released Windows on the West: The Art of Frank Reaugh, companion to the Harry Ransom Center’s current exhibit. He lives in Canyon, Texas.