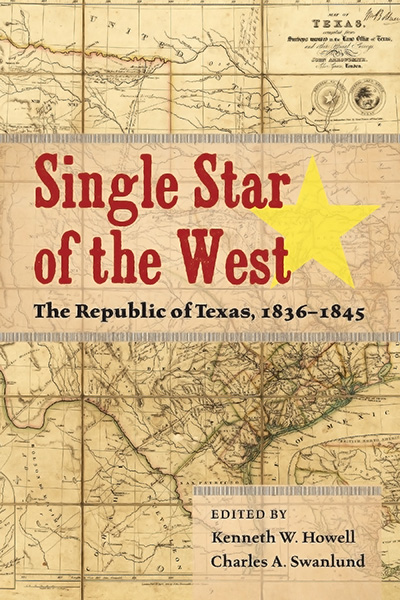 About Howell and Swanlund's Single Star of the West

Does Texas’s experience as a republic make it unique among the other states? In many ways, Texas was an “accidental republic” for nearly ten years, until Texans voted overwhelmingly in favor of annexation to the United States after winning independence from Mexico.

Single Star of the West begins with the Texas Revolution and examines the emergence of a Texas identity. Next, several contributors discuss how the Republic was defended by its army, navy, and the Texas Rangers. Individual chapters focus on the early founders of Texas—Sam Houston, Mirabeau B. Lamar, and Anson Jones. Texas’s efforts at diplomacy, and persistence and transformation in its economy, also receive careful analysis. Finally, social and cultural aspects of the Texas Republic receive coverage, with discussions of women, American Indians, African Americans, Tejanos, and religion.

“With its distinguished array of authors and impressive array of topics, this volume will be welcomed by readers of Texas history.” —Patrick G. Williams, author of Beyond Redemption: Texas Democrats after Reconstruction

KENNETH W. HOWELL is professor of history at Blinn College in Bryan, Texas, and editor or co-editor of The Seventh Star of the Confederacy, Still the Arena of Civil War, and Single Star of the West.

CHARLES SWANLUND is professor of history at Blinn College and co-editor of A Lone Star Reader.