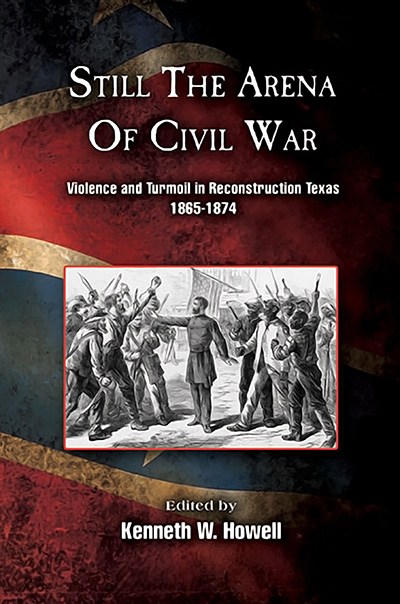 Still the Arena of Civil War: Violence and Turmoil in Reconstruction Texas, 1865-1874

About Howell's Still the Arena of Civil War

Following the Civil War, the United States was fully engaged in a bloody conflict with ex-Confederates, conservative Democrats, and members of organized terrorist groups, such as the Ku Klux Klan, for control of the southern states. Texas became one of the earliest battleground states in the War of Reconstruction. Throughout this era, white Texans claimed that Radical Republicans in Congress were attempting to dominate their state through “Negro-Carpetbag-Scalawag rule.” In response to these perceived threats, whites initiated a violent guerilla war that was designed to limit support for the Republican Party. They targeted loyal Unionists throughout the South, especially African Americans who represented the largest block of Republican voters in the region.

Was the Reconstruction era in the Lone Star State simply a continuation of the Civil War? Evidence presented by sixteen contributors in this new anthology, edited by Kenneth W. Howell, argues that this indeed was the case. Topics include the role of the Freedmen’s Bureau and the occupying army, focusing on both sides of the violence. Several contributors analyze the origins of the Ku Klux Klan and its operations in Texas, how the Texas State Police attempted to quell the violence, and Tejano adjustment to Reconstruction. Other chapters focus on violence against African-American women, the failure of Governor Throckmorton to establish law and order, and the role of newspaper editors influencing popular opinion. Finally, several contributors study Reconstruction by region in the Lower Brazos River Valley and in Lavaca County.

“This is a valuable contribution to Texas and Reconstruction history. The essays reflect an expanded range of topics about Reconstruction in Texas, especially the chapters on Tejano and African American women.” —Alwyn Barr, author of Reconstruction to Reform: Texas Politics, 1876-1906

“Still the Arena of Civil War should attract those interested in Reconstruction and African American history.” —Archie P. McDonald, author of Texas: A Compact History

“Violence is clearly organic to Texas’s experience of Reconstruction. No other southern state faced the frontier and borderland circumstances that escalated the body count in Reconstruction Texas.” —Patrick G. Williams, author of Beyond Redemption: Texas Democrats after Reconstruction

Part One: Representatives of Change: Soldiers, Bureau Agents, and Lawmen

Part Two: The Insurgents and Their Allies: Texas Terrorists, Politicians, and Newspaper Editors

11. Foreigners in Their Native Land: The Violent Struggle between Anglos and Tejanos for Land Titles in South Texas during Reconstruction — Andrés Tijerina

12. “To Punish and Humiliate the Entire Community”: White Violence Perpetrated Against African-American Women in Texas, 1865–1868 — Rebecca A. Kosary

Part Four: Regional Perspectives: The Frontier, the Interior, and Places in Between

KENNETH W. HOWELL is professor of history at Blinn College in Bryan, Texas, and editor or co-editor of The Seventh Star of the Confederacy, Still the Arena of Civil War, and Single Star of the West.

Still the Arena of Civil War: Violence and Turmoil in Reconstruction Texas, 1865-1874