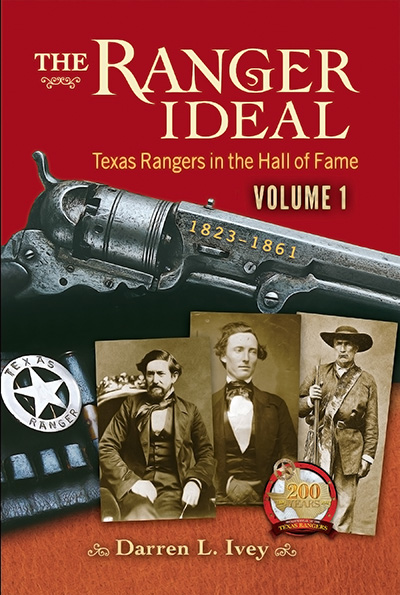 About Ivey's The Ranger Ideal Volume 1

Established in Waco in 1968, the Texas Ranger Hall of Fame and Museum honors the iconic Texas Rangers, a service which has existed, in one form or another, since 1823. They have become legendary symbols of Texas and the American West. Thirty-one Rangers, with lives spanning more than two centuries, have been enshrined in the Hall of Fame.

In The Ranger Ideal Volume 1: Texas Rangers in the Hall of Fame, 1823-1861, Darren L. Ivey presents capsule biographies of the seven inductees who served Texas before the Civil War. He begins with Stephen F. Austin, “the Father of Texas,” who laid the foundations of the Ranger service, and then covers John C. Hays, Ben McCulloch, Samuel H. Walker, William A. A. “Bigfoot” Wallace, John S. Ford, and Lawrence Sul Ross.

Using primary records and reliable secondary sources, and rejecting apocryphal tales, The Ranger Ideal presents the true stories of these intrepid men who fought to tame a land with gallantry, grit, and guns. This Volume 1 is the first of a planned three-volume series covering all of the Texas Rangers inducted into the Hall of Fame and Museum in Waco, Texas.

“Ivey’s work is a well-researched, well-organized, and well-written chronicle of the dramatic events in the military era of the Texas Rangers. His encyclopedic presentation of life stories—mini-biographies—is definitive and is the centerpiece of the book.” —Harold J. Weiss Jr., author of Yours to Command: The Life and Legends of Texas Ranger Captain Bill McDonald