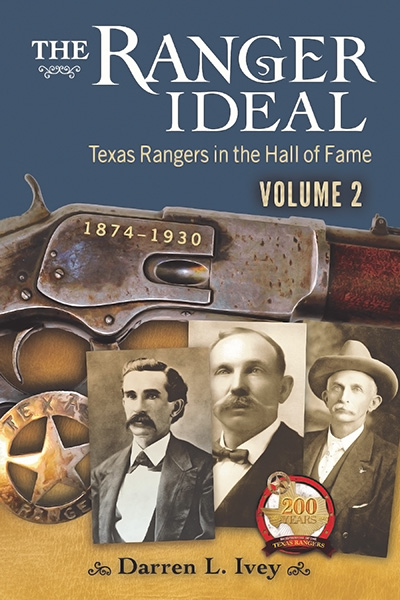 About Ivey's The Ranger Ideal Volume 2

Established in Waco in 1968, the Texas Ranger Hall of Fame and Museum honors the iconic Texas Rangers, a service that has existed, in one form or another, since 1823. They have become legendary symbols of Texas and the American West.

In The Ranger Ideal Volume 2: Texas Rangers in the Hall of Fame, 1874-1930, Darren L. Ivey presents the twelve inductees who served Texas in the latter half of the nineteenth century. Ivey begins with John B. Jones, who directed his Rangers from state troops to professional lawmen; then covers Leander H. McNelly, John B. Armstrong, James B. Gillett, Jesse Lee Hall, George W. Baylor, Bryan Marsh, and Ira Aten—the men who were responsible for some of the Rangers’ most legendary feats. Ivey concludes with James A. Brooks, William J. McDonald, John R. Hughes, and John H. Rogers, the “Four Great Captains” who guided the Texas Rangers into the twentieth century.

The Ranger Ideal presents the true stories of these intrepid men who fought to tame a land with gallantry, grit, and guns.