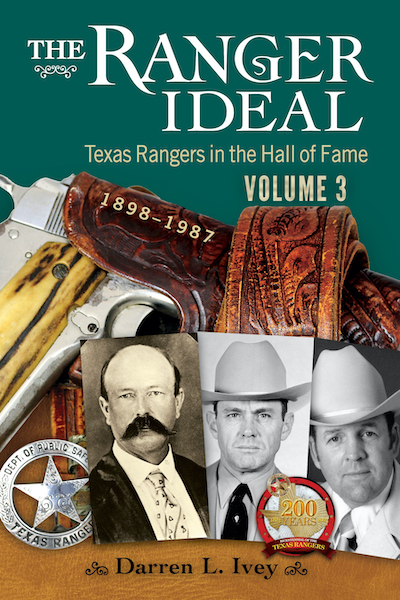 About Ivey's The Ranger Ideal Volume 3

In The Ranger Ideal Volume 3, Darren L. Ivey presents capsule biographies of the twelve inductees who served Texas in the twentieth century. In the first portion of the book, Ivey describes the careers of the “Big Four” Ranger captains—Will L. Wright, Frank Hamer, Tom R. Hickman, and Manuel “Lone Wolf” Gonzaullas—as well as those of Charles E. Miller and Marvin “Red” Burton. Ivey then moves into the mid-century and discusses Robert A. Crowder, John J. Klevenhagen, Clinton T. Peoples, and James E. Riddles. Ivey concludes with Bobby Paul Doherty and Stanley K. Guffey, both of whom gave their lives in the line of duty.

Using primary records and reliable secondary sources, and rejecting apocryphal tales, The Ranger Ideal presents the true stories of these intrepid men who enforced the law with gallantry, grit, and guns. This Volume 3 is the finale in a three-volume series covering all of the Texas Rangers inducted in the Hall of Fame and Museum in Waco, Texas.