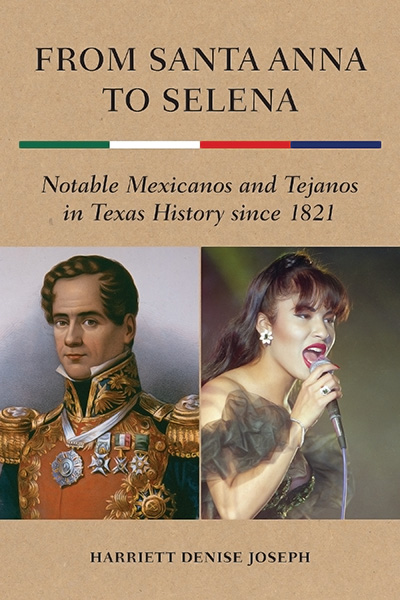 From Santa Anna to Selena: Notable Mexicanos and Tejanos in Texas History since 1821

About Joseph's From Santa Anna to Selena

Learn more about Dr. Joseph and her passion for Texas history at her website Texas Joseph.

Author Harriett Denise Joseph relates biographies of eleven notable Mexicanos and Tejanos, beginning with Santa Anna and the impact his actions had on Texas. She discusses the myriad contributions of Erasmo and Juan Seguín to Texas history, as well as the factors that led a hero of the Texas Revolution (Juan) to be viewed later as a traitor by his fellow Texans. Admired by many but despised by others, folk hero Juan Nepomuceno Cortina is one of the most controversial figures in the history of nineteenth-century South Texas. Preservationist and historian Adina De Zavala fought to save part of the Alamo site and other significant structures. Labor activist Emma Tenayuca’s youth, passion, courage, and sacrifice merit attention for her efforts to help the working class.

Joseph reveals the individual and collective accomplishments of a powerhouse couple, bilingual educator Edmundo Mireles and folklorist-author Jovita González. She recognizes the military and personal battles of Medal of Honor recipient Raul “Roy” Benavidez. Irma Rangel, the first Latina to serve in the Texas House of Representatives, is known for the many “firsts” she achieved during her lifetime. Finally, we read about Selena’s life and career, as well as her tragic death and her continuing marketability.

HARRIETT DENISE JOSEPH is professor of history at the University of Texas Rio Grande Valley. She has co-authored three books with Donald E. Chipman, including the award-winning Notable Men and Women of Spanish Texas; Explorers and Settlers of Spanish Texas; and the revised edition of Spanish Texas, 1519–1821. She lives in Brownsville, Texas.

From Santa Anna to Selena: Notable Mexicanos and Tejanos in Texas History since 1821