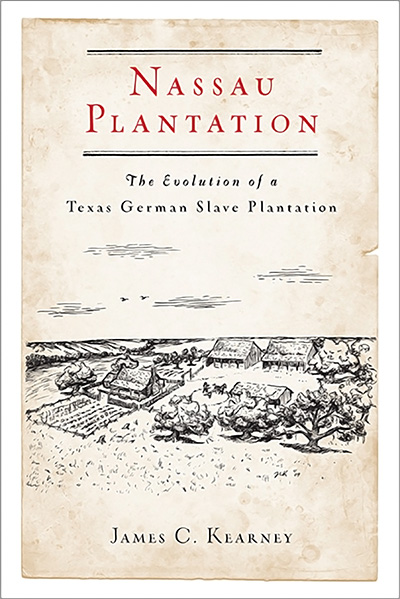 Nassau Plantation: The Evolution of a Texas German Slave Plantation

The first printing of this title accidentally dropped the endnotes to Chapter 13; these notes are available for viewing in the Excerpt field below.

In the 1840s an organization of German noblemen, the Mainzner Adelsverein, attempted to settle thousands of German emigrants on the Texas frontier. Nassau Plantation, located near modern-day Round Top, Texas, in northern Fayette County, was a significant part of this story. No one, however, has adequately documented the role of the slave plantation or given a convincing explanation of the Adelsverein from the German point of view.

James C. Kearney has studied a wealth of original source material (much of it in German) to illuminate the history of the plantation and the larger goals and motivation of the Adelsverein, both in Texas and in Germany. Moreover, this new study highlights the problematic relationship of German emigrants to slavery. Few today realize that the society’s original colonization plan included ownership and operation of slave plantations. Ironically, the German settlements the society later established became hotbeds of anti-slavery and anti-secessionist sentiment.

Responding to criticism in Germany, the society declared its colonies to be “slave free zones” in 1845. This act thrust the society front and center into the complicated political landscape of Texas prior to annexation. James A. Mayberry, among others, suspected an English-German conspiracy to flood the state with anti-slavery immigrants and delivered a fiery speech in the legislature denouncing the society.

In the 1850s the plantation became a magnet for German immigration into Fayette and Austin Counties. In this connection, Kearney explores the role and influence of Otto von Roeder, a largely neglected but important Texas-German. Another chapter deals with the odyssey of the extended von Rosenberg family, who settled on the plantation in 1850 and helped to elevate the nearby town of Round Top into a regional center of culture and education. Many members of the family subsequently rose to positions of leadership and influence in Texas.

Several notable personalities graced the plantation—Carl Prince of Solms-Braunfels, Johann Otto Freiherr von Meusebach, botanist F. Lindheimer, and the renowned naturalist Dr. Ferdinand Roemer, to name a few. Dramatic events also occurred at the plantation, including a deadly shootout, a successful escape by two slaves (documented in an unprecedented way), and litigation over ownership that wound its way to both the Texas Supreme Court and the U.S. Supreme Court.

“In depth, thoroughness, and scope, Nassau Plantation has no equal in the literature of the Society. It will become the standard reference on this topic and will be of interest to scholars of German-Texan history as well as to the large element of German-Texans.” —Wolfram M. Von-Maszewski, editor of Voyage to North America 1844-45: Prince Carl of Solms’s Texas Diary of People, Places, and Events

“The topic is excellent. The only extended monographs on the Adelsverein and German emigration to Texas date to the early twentieth century. A lot of material has come to light since these studies appeared, and Kearney is on top of the sources.” —Walter Struve, author of Germans and Texans

“Nassau Plantation is well grounded in primary sources with good biographical information on the major characters. This will be a valuable reference work.” —Walter Buenger, author of Secession and the Union in Texas and coeditor of Texas Through Time

“Nassau Plantation is an absorbing historical chronicle, following the notable deeds of prominent individuals and families of the plantation as well as the plantation’s impact upon Texas society as a whole. A welcome and worthy addition to Texas and German-American history shelves.” —Midwest Book Review

JAMES C. KEARNEY currently teaches at the University of Texas in Austin. He is the author of Nassau Plantation; co-editor of Journey to Texas, 1833; and translator and editor of Friedrichsburg: The Colony of the German Fürstenverein.

Nassau Plantation: The Evolution of a Texas German Slave Plantation