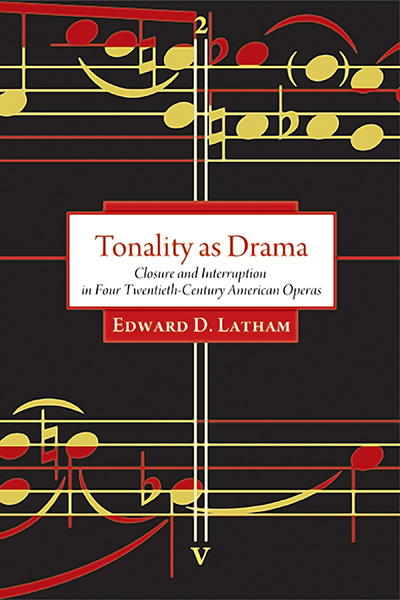 About Latham's Tonality as Drama

Tonality as Drama: Closure and Interruption in Four Twentieth-Century American Operas is now available as a free e-book via Knowledge Unlatched.

Whether you are “in the business,” or you are a music theorist, musicologist, or simply an opera fan—read on! This is an analytical monograph by a Schenkerian music theorist, but it is also written by one performer and enthusiast for another. Tonality as Drama draws on the fields of dramaturgy, music theory, and historical musicology to answer a fundamental question regarding twentieth-century music: why does the use of tonality persist in opera, even after it has been abandoned in other genres? Combining the analytical approaches of the leading music and dramatic theorists of the twentieth century—Austrian music theorist Heinrich Schenker (1868-1935) and Russian director Constantin Stanislavsky (1863-1938)—Edward D. Latham reveals insights into works by Scott Joplin, George Gershwin, Kurt Weill, and Aaron Copland that are relevant to analysts, opera directors, and performers alike.

Tonality as Drama is not a textbook—rather, it is an innovative analytical study meant to inspire changes in the study and performance of tonal opera. By applying Schenker’s tonal analytical technique to a small segment (early twentieth-century American opera) of a repertoire typically regarded as non-tonal (modern opera), Latham reveals a strategic use of tonality in that repertoire as a means of amplifying or undercutting the success or failure of dramatic characters. This use of “strategic tonality” is present in many of the grand operas and song cycles of the nineteenth century as well, suggesting avenues for future research.

“Latham’s boldest idea is that a dramatic analysis of character roles along the lines of what Konstantin Stanislavsky proposed may be merged with a musical analysis along the lines of what Heinrich Schenker proposed. His analyses are well formed, interesting, and insightful; and his application of both methodologies is thorough and convincing.” —Andrew Davis, director of graduate studies, Moores School of Music, University of Houston

EDWARD D. LATHAM was born in Lowell, Massachusetts, and attended Phillips Academy and Yale University, where he received his PhD in 2000. He has lived and worked in New Hampshire, Connecticut, and Minnesota, and is currently assistant professor of music theory at Temple University’s Boyer College of Music and Dance in Philadelphia, where he was the recipient of the 2007 Teaching Academy Award for excellence in teaching. In addition to teaching and writing about music, Dr. Latham is active as a professional singer and church musician.