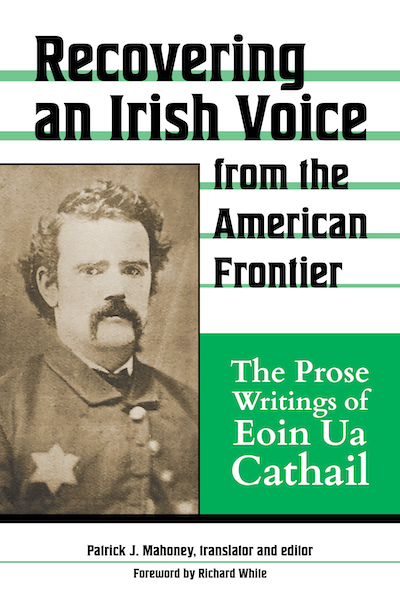 About Mahoney's Recovering an Irish Voice from the American Frontier

Recovering an Irish Voice from the American Frontier is a bilingual compilation of stories by Eoin Ua Cathail, an Irish emigrant, based loosely on his experiences in the West and Midwest. The author draws on the popular American Dime Novel genre throughout to offer unique reflections on nineteenth-century American life. As a member of a government mule train accompanying the U.S. military during the Plains Indian Wars, Ua Cathail depicts fierce encounters with Native American tribes, while also subtly commenting on the hypocrisy of many famine-era Irish immigrants who failed to recognize the parallels between their own plight and that of dispossessed Native peoples. These views are further challenged by his stories set in the upper Midwest.

His writings are marked by the eccentricities and bloated claims characteristic of much American Western literature of the time, while also offering valuable transnational insights into Irish myth, history, and the Gaelic Revival movement. This bilingual volume, with facing Irish-English pages, marks the first publication of Ua Cathail’s work in both the original Irish and in translation. It also includes a foreword from historian Richard White, a comprehensive introduction by Mahoney, and a host of previously unpublished historical images.

“Ua Cathail’s Irish-language tales anticipate Twain and Hemingway in a multicultural world of settlers, shysters, and simple idealists still confronted by the challenge of Native Americans.”—Declan Kiberd, author of Inventing Ireland: The Literature of a Modern Nation

PATRICK J. MAHONEY, or Pádraig Fhia Ó Mathúna, is a Caspersen Fellow in History and Culture at Drew University and a Fulbright Scholar at the National University of Ireland Galway. He is the co-author of From a Land beyond the Wave: Connecticut’s Irish Rebels, 1798-1916.