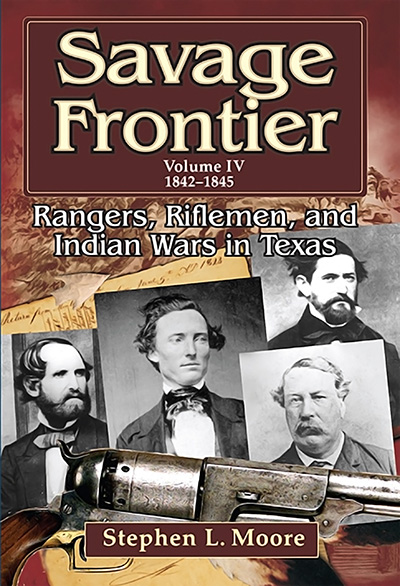 This fourth and final volume of the Savage Frontier series completes the history of the Texas Rangers and frontier warfare in the Republic of Texas era. During this period of time, fabled Captain John Coffee Hays and his small band of Rangers were often the only government-authorized frontier fighters employed to keep the peace.

Author Stephen L. Moore covers the assembly of Texan forces to repel two Mexican incursions during 1842, the Vasquez and Woll invasions. This volume covers the resulting battle at Salado Creek, the defeat of Dawson’s men, and a skirmish at Hondo Creek near San Antonio. Texas Rangers also played a role in the ill-fated Somervell and Mier expeditions.

By 1844, Captain Hays’ Rangers had forever changed the nature of frontier warfare with the use of the Colt five-shooter repeating pistol. This new weapon allowed his men to remain on horseback and keep up a continuous and deadly fire in the face of overwhelming odds, especially at Walker’s Creek. Through extensive use of primary military documents and first-person accounts, Moore sets the record straight on some of Jack Hays’ lesser-known Comanche encounters.

For the exacting historian or genealogist of early Texas, the Savage Frontier series is an indispensable resource on early nineteenth-century Texas frontier warfare.

“Moore’s fourth and final volume of the Savage Frontier series contains many compelling battle narratives, but there is a wealth of social as well as military history lurking in these chapters. No one who is interested in the people and the problems of the Texas Republic can afford to leave these pages unread.” —James E. Crisp, author of How Did Davy Die? And Why Do We Care So Much?

“The early 1840s was one of the most turbulent chapters in the history of the lower Rio Grande valley. Readers familiar with earlier volumes in the Savage Frontier series will find much to admire in Steven Moore’s eminently readable account.” —Sam W. Haynes, author of Soldiers of Misfortune: The Somervell and Mier Expeditions

PRAISE FOR THE SAVAGE FRONTIER SERIES

“An exhaustively researched study of the pervasive violence that confronted the newborn Texas Rangers even in colonial days.” —Kent Biffle, Dallas Morning News

“The volumes of Savage Frontier provide exciting action and accurate history. In addition, important genealogical material is given for anyone seeking the role of his or her ancestors in early Texas history.” —Chuck Parsons, Texas Ranger Dispatch

“Moore has done an extraordinary job of exhaustively researching his subject. I am not aware of any other book that investigates this period of Ranger history with such thoroughness as Savage Frontier.” —Donaly Brice, author of The Great Comanche Raid

STEPHEN L. MOORE is a sixth-generation Texan and author of volumes 1, 2, and 3 of Savage Frontier: Rangers, Riflemen, and Indian Wars in Texas, covering the years 1835-37, 1838-39, and 1840-41. He is also the author of several other titles, including Eighteen Minutes: The Battle of San Jacinto and the Texas Independence Campaign and Taming Texas: Captain William T. Sadler’s Lone Star Service. Steve, his wife Cindy, and their children Kristen, Emily, and Jacob live near Dallas in Lantana, Texas.