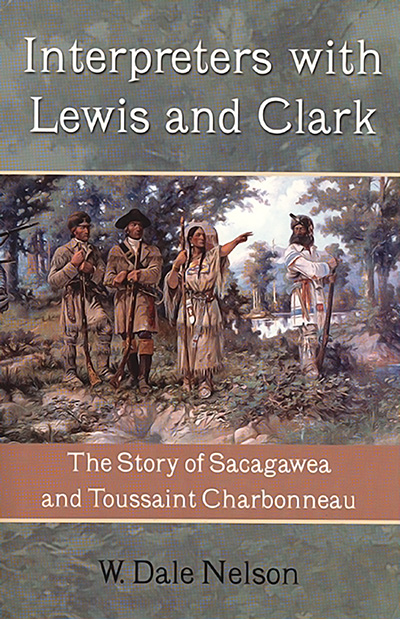 About Nelson's Interpreters with Lewis and Clark

When interpreter Toussaint Charbonneau, a French Canadian fur trader living among the Hidatsas, and his Shoshone Indian wife, Sacagawea, joined the Lewis and Clark expedition in 1804, they headed into country largely unknown to them, as it was to Thomas Jefferson’s hand-picked explorers. There is little doubt as to the importance of Sacagawea’s presence on the journey. She has become a near-legendary figure for her role as interpreter, guide, and “token of peace.” Toussaint, however, has been maligned in both fiction and nonfiction alike—Lewis himself called him “a man of no peculiar merit.”

W. Dale Nelson offers a frank and honest portrayal of Toussaint, suggesting his character has perhaps been judged too harshly. He was indeed valuable as an interpreter and no doubt helpful with his knowledge of the Indian tribes the group encountered. For example, Toussaint proved his worth in negotiations with the Shoshones for much-needed horses, and with his experience as a fur trader, he always seemed to strike a better bargain than his companions.

During the expedition Sacagawea gave birth to a son, Jean Baptiste. With her death in 1812, Clark assumed custody of her son and Toussaint returned to his life on the upper Missouri. Surviving his wife by almost three decades, Toussaint worked under Clark (then Superintendent of Indian Affairs in St. Louis) as an interpreter for government officials, explorers, artists, and visiting dignitaries. Jean Baptiste traveled the Rocky Mountains as a mountain man, was a scout during the Mexican American War, and served as mayor and judge for the San Luis Rey Mission.

“Quite useful to scholars and lay people alike as an enthusiastic public seeks the best biographies available on the men and women of the Lewis and Clark Expedition. Nelson incorporates many fine primary sources and gives the reader a sense of Charbonneau, the person, lacking in present treatments.” —William Swagerty, editor of Scholars and the Indian Experience

“An epic story of a family that is involved in a broad spectrum of western history in the first two-thirds of the 19th century. It is amazing just how many prominent explorers, artists, European visitors, military figures, etc. that they encounter. This is the kind of history that used to be written when people read history for fun.” —R. David Edmunds, author of Tecumseh and the Quest for Indian Leadership

W. DALE NELSON spent forty years with The Associated Press, first in western bureaus and then in Washington, D.C., where he was honored with the Aldo Beckman Award, given annually by the White House Correspondents Association for excellence in reporting about the presidency. He is the author of two books and holds a master’s degree in library science from the University of Washington. He lives in Laramie, Wyoming.