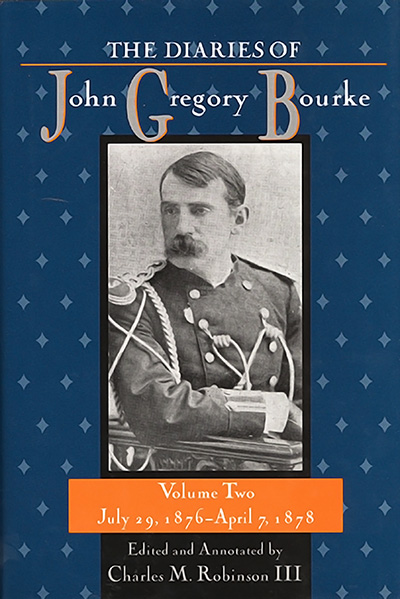 About Robinson III's The Diaries of John Gregory Bourke Volume 2

Previously, researchers could consult only a small part of Bourke’s diary material in various publications, or else take a research trip to the archive and microfilm housed at West Point. Now, for the first time, the 124 manuscript volumes of the Bourke diaries are being compiled, edited, and annotated by Charles M. Robinson III, in a planned set of six books easily accessible to the modern researcher.

This volume opens as Crook prepares for the expedition that would lead to his infamous and devastating Horse Meat March. Although Bourke retains his loyalty to Crook throughout the detailed account, his patience is sorely tried at times. Bourke’s description of the march is balanced by an appendix containing letters and reports by other officers, including an overview of the entire expedition by Lt. Walter Schuyler, and a report by Surgeon Bennett Clements describing the effects on the men. The diary continues with the story of the Powder River Expedition, culminating in Bourke’s eyewitness description of Col. Ranald Mackenzie’s destruction of the main Cheyenne camp in what became known at the Dull Knife Fight. With the main hostile chiefs either surrendering or forced into exile in Canada, field operations come to a close, and Bourke finishes this volume with a retrospective of his service in Tucson, Arizona.