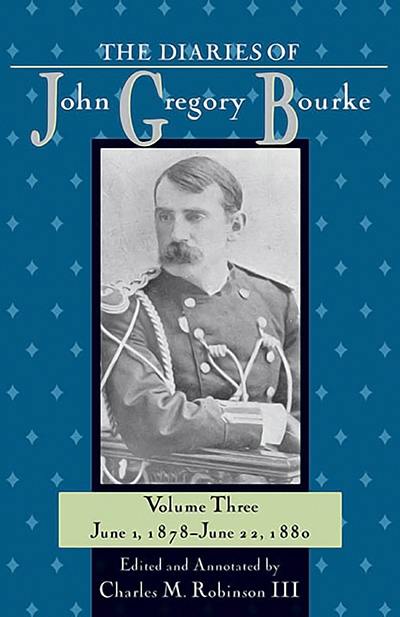 About Robinson III's The Diaries of John Gregory Bourke Volume 3

Previously, researchers could consult only a small part of Bourke’s diary material in various publications, or else take a research trip to the archive and microfilm housed at West Point. Now, for the first time, the 124 manuscript volumes of the Bourke diaries are being compiled, edited, and annotated by Charles M. Robinson III, in a planned set of eight books easily accessible to the modern researcher.

Volume 3 begins in 1878 with a discussion of the Bannock Uprising and a retrospective on Crazy Horse, whose death Bourke called “an event of such importance, and with its attendant circumstances pregnant with so much of good or evil for the settlement between the Union Pacific Rail Road and the Yellowstone River.” Three other key events during this period were the Cheyenne Outbreak of 1878-79, the Ponca Affair, and the White River Ute Uprising, the latter two in 1879. The mistreatment of the Poncas infuriated Bourke: when recording the initial meeting between Crook and the Poncas, he wrote: “This conference is inserted verbatim merely to show the cruel and senseless ways in which the Government of the United States deals with the Indian tribes who confide in its justice or trust themselves to its mercy.”

Bourke’s diary covers his time not only on the Plains and Midwest, but also digresses to his time as a young junior officer, fresh out of West Point, and experiencing his first introduction to the Southwest. He comments on issues in the military during his day, such as the quirks and foibles of the Irish soldiers who made up a large part of the frontier army, and also on the problems of Johnson Whittaker, who became West Point’s only black cadet following the graduation of Henry Flipper in 1878.

“This is a must for the library of everyone interested in the Indians and the military frontier.” —Paul A. Hutton, author of Phil Sheridan and His Army

“One of the most valuable contributions of Bourke’s diaries is his effort to record what Native Americans actually said in meetings with Crook. These verbatim transcripts are extremely rare.” —Sherry L. Smith, author of Reimagining Indians