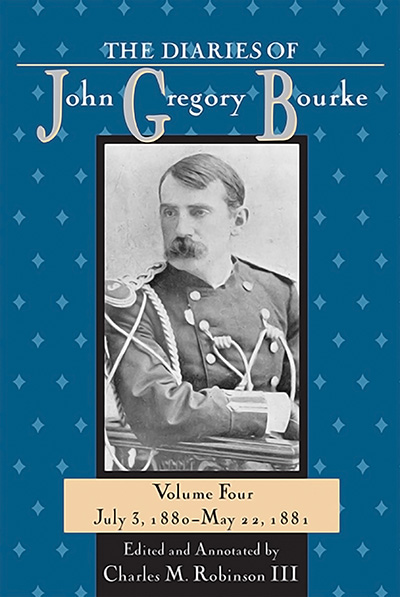 About Robinson III's The Diaries of John Gregory Bourke Volume 4

Previously, researchers could consult only a small part of Bourke’s diary material in various publications, or else take a research trip to the archive and microfilm housed at West Point. Now, for the first time, the 124 manuscript volumes of the Bourke diaries are being compiled, edited, and annotated by Charles M. Robinson III, in a planned set of eight books easily accessible to the modern researcher.

Volume 4 chronicles the political and managerial affairs in Crook’s Department of the Platte. A large portion centers on the continuing controversy concerning the forced relocation of the Ponca Indians from their ancient homeland along the Dakota-Nebraska line to a new reservation in the Indian Territory. An equally large portion concerns Bourke’s ethnological work under official sanction from the army and the Bureau of Ethnology, work which would make a profound change in his life and his place in history. Aside from a summary of the entire Ponca affair in approximately two pages, virtually none of this material appears in Bourke’s classic On the Border with Crook.

Bourke’s staff duties bring him into contact with many prominent individuals. He is particularly unimpressed with the commander of the army, General W.T. Sherman, who, he wrote, “is largely made up of the demagogue and will not survive in history.” He also is harsh on President Rutherford B. Hayes, now finishing out his term.

This volume contains detailed descriptions of several tours, including those to Yellowstone National Park and the Santa Fe regions. Bourke reveals the profound changes that have overtaken the Indians in only a few years of settlement on reservations. At the new Spotted Tail, or Rosebud, Agency, he found a conference in progress, where the Milwaukee & St. Paul Railroad was attempting to buy right of way across the reservation. The leaders Spotted Tail and Red Cloud had wasted little time in determining what was valuable to the whites—they astutely bargained for a high price.