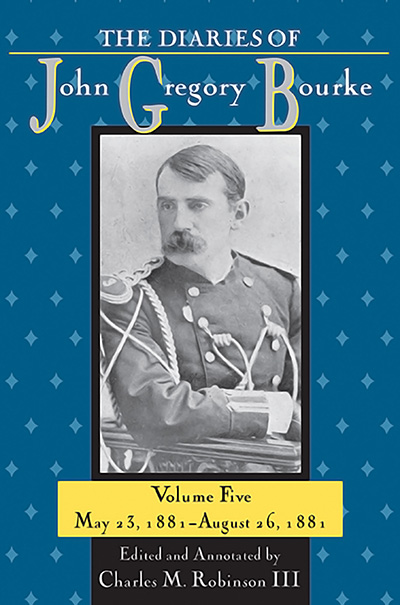 About Robinson III's The Diaries of John Gregory Bourke Volume 5

Previously, researchers could consult only a small part of Bourke’s diary material in various publications, or else take a research trip to the archive and microfilm housed at West Point. Now, for the first time, the 124 manuscript volumes of the Bourke diaries are being compiled, edited, and annotated by Charles M. Robinson III in an easily accessible form to the modern researcher.

This fifth volume opens at Fort Wingate as Bourke prepares to visit the Navajos. Next, at the Pine River Agency, he is witness to the Sun Dance, where despite his discomfort at what he saw, he noted that during the Sun Dance piles of food and clothing were contributed by the Indians themselves, to relieve the poor among their people. Bourke continued his travels among the Zunis, the Rio Grande pueblos, and finally, with the Hopis to attend the Hopi Snake dance. The volume concludes at Fort Apache, Arizona, which is stirring with excitement over the activities of the Apache medicine man, Nakai’-dokli’ni, which Bourke spelled Na Kay do Klinni. This would erupt into bloodshed less than a week later.

Volume Five is especially important because it is the first in this series to deal almost exclusively with Bourke’s ethnological research. Aside from a brief trip to the East Coast, most of the text involves his observations either during the Great Oglala Sun Dance of 1881, or among the pueblos of New Mexico and Arizona. Bourke’s account of the Sun Dance is particularly significant because it was the last one held by the Oglalas. The Hopi material in this volume served as the basis of The Snake Dance of the Moquis of Arizona, published three years later in 1884, and perhaps his best-known work after On the Border with Crook.

Praise for the series:

“This is a must for the library of everyone interested in the Indians and the military frontier.” —Paul A. Hutton, author of Phil Sheridan and His Army

“Robinson’s Bourke volumes are definitive and the worth of the effort and material ranks at the highest of achievements. Bourke’s writings are keenly insightful, filled with color, and replete with a Who’s Who of the American West and Old Army.” —Paul L. Hedren, author of Fort Laramie and the Great Sioux War