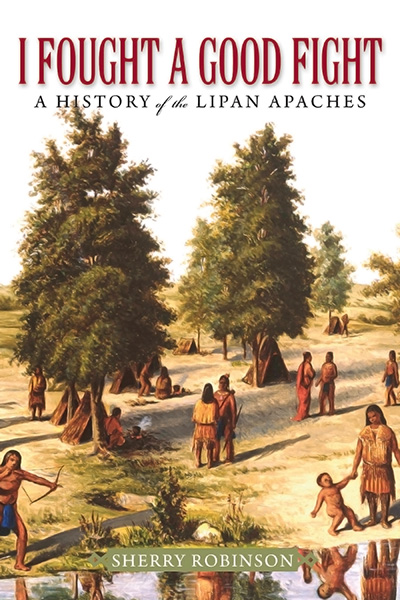 I Fought a Good Fight: A History of the Lipan Apaches

About Robinson's I Fought a Good Fight

This history of the Lipan Apaches, from archeological evidence to the present, tells the story of some of the least known, least understood people in the Southwest. These plains buffalo hunters and traders were one of the first groups to acquire horses, and with this advantage they expanded from the Panhandle across Texas and into Coahuila. Around 1700, the Comanches began forcing Eastern Apaches from their haunts, but they didn’t yield easily and from then on were the Comanches’ stubborn enemies.

For a small group, the Lipans had an outsized impact through three centuries. They were as clever, fearless, and resourceful as the better known Chiricahua Apaches. With a knack for making friends and forging alliances, they survived against all odds, and were still free long after their worst enemies were corralled on reservations.

In the most thorough account yet published, Sherry Robinson uses oral history and ethnology along with conventional sources to track the Lipans, from their earliest interactions with Spaniards and kindred Apache groups through later alliances with other tribes and French traders to their love-hate relationships with Mexicans, Texas colonists, Texas Rangers, and the U.S. Army. For the first time we hear of the Eastern Apache confederacy of allied but autonomous groups that joined for war, defense, and trade. Among their confederates, and led by chiefs with a diplomatic bent, Lipans drew closer to the Spanish, Mexicans, and Texans. This familiarity was good for alliances and trade and led to attempts at mission living and service as scouts, but it also exposed the Lipans to disease.

Also for the first time, we learn of their final movements. As enemies, the Lipans were known for guerrilla tactics, but always facing a larger enemy, they lost ground to Mexican campaigns and Mackenzie’s raids. By the 1880s, their numbers dwindling, they roamed with Mescalero Apaches from Mexico to the Pecos to the Mescalero Reservation. Some Lipans rode with Victorio. Many remained in Mexico, some stole back into Texas, and others melted into reservations where they had relatives. They never surrendered.

“Robinson sorts out the various groups and assiduously follows their trail over two centuries of movement and their attempts to survive overwhelming odds from powerful enemies such as the Comanches, Spanish, Mexicans, Texans, and American military from Coronado’s time through the late nineteenth century. It is hard to imagine a source that Robinson has not seen. This is a major and impressive contribution—it will answer all the questions about the Lipans.” —Edwin R. Sweeney, author of From Cochise to Geronimo

“This is unquestionably the most thorough historiography of the Lipan Apaches. Robinson covers the widest chronological and geographical scope and relies on the richest and most diverse assortment of primary (including abundant Spanish-language archival documents) and secondary sources. She has done exhaustive and praiseworthy research on the Lipans. She also devotes considerable attention to explore the roles of particular individuals (mostly male leaders) in Lipan history.” —Joaquín Rivaya-Martinez, Texas State University, San Marcos

SHERRY ROBINSON is a long-time New Mexico journalist and author whose work has earned awards from nine communications organizations. She graduated from the University of New Mexico and began her career in 1975 on the Navajo Reservation. She has worked for newspapers, television, and the University of New Mexico, where she edited the award-winning research magazine, Quantum. She is the author of Apache Voices and El Malpais, Mt. Taylor and the Zuni Mountains. Robinson has given talks on Apaches as a member of the speaker’s bureau for the New Mexico Humanities Council since 1999. She lives in Albuquerque.

I Fought a Good Fight: A History of the Lipan Apaches