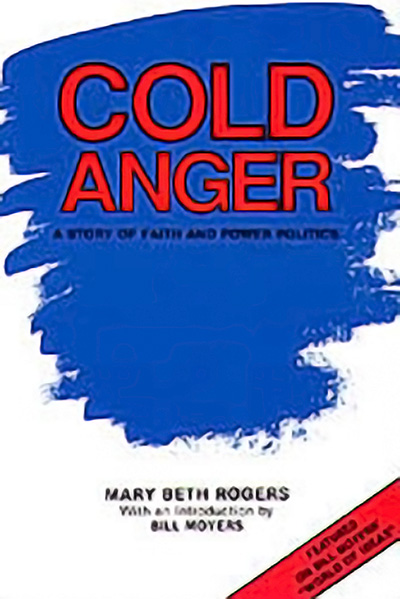 Cold Anger: A Story of Faith and Power Politics

“Cold Anger is an important book about the empowerment of working-class communities through church-based social activism. Such activism is certainly not new, but the conscious merger of community organizing tactics with religious beliefs may be. The organizing approach comes from Aul Alinsky and his Industrial Areas Foundations (IAF)… The book is structured around the polifical life of Ernesto Cortes, Jr., the lead IAF organizer who has earned recognition as one of the most powerful individuals in Texas (and who has been featured on Bill Moyers’ “World of Ideas”)… Cortes fashioned a hard-ball Alinsky approach onto the natural organizing ground of church-based communities. The experiment began in San Antonio… and was successful in the transformation of San Antonio politics.

Such dramatic success… led to similar efforts in Houston, Fort Worth, El Paso, the Rio Grande Valley, Phoenix, Los Angeles, and New York, to mention only a few sites. Expansion beyond San Antonio meant organizing among Protestant churches, among African American and White, and among middle-class communities. In short, these organizing efforts have transcended the particularistic limits of religion, ethnicity, and class while maintaining a church base and sense of spiritual mission…

“…effectively captures the flavor of the movement in small, rural locales and in major urban centers… Recommended for all libraries.” —Library Journal{endorsement

“I concur with Rogers that the efforts of Cortes and the IAF should receive national attention from all those interested in addressing our most serious domestic and urban ills. Cold Anger is a good place to start.” —The Journal of Southern History

“This may prove to be the year’s most thought-provoking book. Anyone jaded by or cynical about the American political process will find reason for renewed hope in reading this volume.” —Best Books of the Southwest, Arizona Daily Star

“In the gospel according to Ernesto Cortes, you never, ever, do for people what they can do for themselves. He calls it the Iron Rule, a sort of guide for effective leadership. It assures that no group ever becomes too dependent on its leader… that’s the paradox of Ernesto Cortes, an advocate of power who gives it away.” —Dallas Morning News

“Once in a while, a “little guy” manages to get a big job done, and all of us are enlarged by the experience… Cold Anger tells the story of “little” people who have made a big difference… Cortes proved to the working poor that they could turn the “cold anger” they felt at being left out of their government’s decision-making process into energy and action that would bring positive change. “Cold Anger” is a good phrase, and a good book.” —San Antonio Express-News

Cold Anger: A Story of Faith and Power Politics is a recommended text for use in classrooms where the following subjects are being studied: Community Service; Urban Studies.

As the prologue explains, “ Cold Anger is a story about a new kind of intervention in politics by working poor people who incorporate their religious values into a struggle for power and visibility. It is about women and men who promote public and private hope, political and personal responsibility, community and individual transformation.” The Arizona Daily Star exclaimed: “This may prove to be the year’s most thought-provoking book. Anyone jaded by or cynical about the American political process will find reason for renewed hope in reading this volume.”

Cold Anger: A Story of Faith and Power Politics