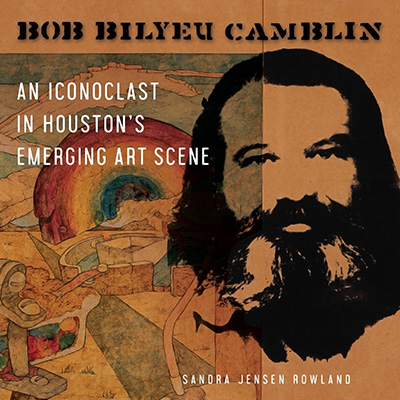 Born in Ponca City, Oklahoma, Bob Camblin (1928-2010) was an artist, first and foremost. He earned his BFA and MFA degrees from the Kansas City Art Institute. His studies were followed by a Fulbright Fellowship that allowed him a year’s stay in Italy. Returning to the USA, he held teaching positions at the Ringling Museum, the University of Illinois, Detroit Mercy, and the University of Utah before moving to Houston in 1967 to teach at Rice’s new art department. He was active in Houston during the late 1960s through the 1980s, collaborating with Earl Staley and Joe Tate on many projects, including “happenings” on the beach in Galveston. His career led him to creative undertakings all over the world. Throughout his lifetime he constantly experimented with various art media. He remained open to new ideas and new techniques until his death in Louisiana in 2010.

Camblin was a central figure in the period of artistic fermentation in Houston that is now beginning to receive increasing critical attention. He chose Rowland to be his historian while still at Rice, and her insights into him are based on many personal letters and conversations. In addition, she is a trained art historian and brings to bear professional expertise about his place in regional and American art. Her work includes a useful timeline of Camblin’s exhibitions and major artworks.

“Camblin is certainly one of the most compelling, original, and charismatic artists ever to emerge in Houston, and now almost a decade after his death, he’s ripe for rediscovery.” —Pete Gershon, author of Collision: The Contemporary Art Scene in Houston, 1972–1985

SANDRA JENSEN ROWLAND is an art historian who trained at Rice, where she was Camblin’s student. She was mentored by Dominique de Menil for whom she worked during the 1970s. She then ran the Texas Project for the Smithsonian’s Archives of American Art from 1978 to 1985. She lives in Salt Lake City.