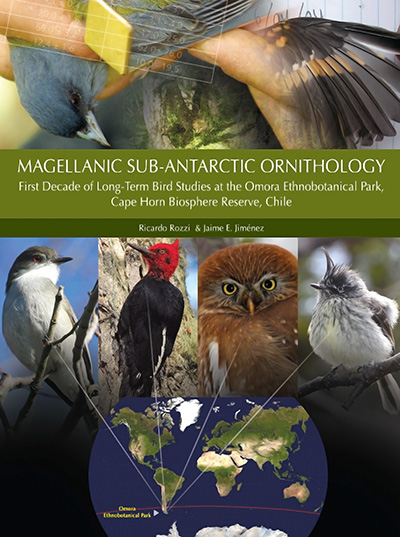 The first synthesis of current knowledge of forest and wetland birds in the world’s southernmost forests, this book contains both original work by Rozzi and Jiménez and the results of a decade of research conducted by the scientists associated with the Omora Park. The first part is a guide to the forest bird populations and habitats in the Reserve, and a summary of the data recorded for the bird species captured with mist-nets and banded. The information is given in two pages for each species, with English, Spanish, and scientific names, as well as a full-color photo, distribution maps, a table with original morphological information, a figure indicating abundance rates, and a brief description of the species’ main features.

The second part is a selection of twenty-two published articles on ornithological research at Omora Park during its first decade of studies, from 2000 to 2010. Eleven of the twenty-two articles were originally published in Spanish and are here translated and available to a larger readership. The reprinting of these articles in one place provides interested scientists, students, and wildlife managers a unique and convenient resource.

“This book has two important sources of information: original morphological data and the compilation of all publications about the birds in the southern extreme of South America. I think the book will have great significance.” —Victor R. Cueto, professor of natural sciences, Universidad de Buenos Aires, Argentina

RICARDO ROZZI is a professor in the Department of Philosophy and Religion Studies at the University of North Texas, and the Universidad de Magallanes in Chile. He is co-author of Multi-Ethnic Bird Guide of the Sub-Antarctic Forests of South America, Miniature Forests of Cape Horn, and Magellanic Sub-Antarctic Ornithology (UNT Press).

JAIME E. JIMÉNEZ is a professor of biology at UNT with a co-appointment in philosophy and religion studies. They are co-directors of the Sub-Antarctic Biocultural Conservation Program.