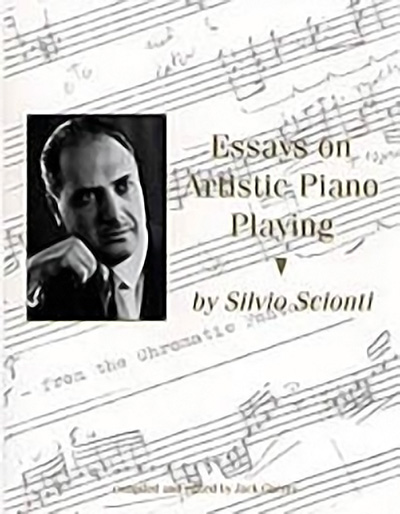 About Scionti and Guerry's Essays on Artistic Piano Playing

Silvio Scionti (1882–1973), the distinguished Italian-American pianist and teacher, was a prolific writer. This book, about artistry in piano playing, contains heretofore unpublished essays that Scionti wrote over a period of many years. The topics range from “Basic Points in Fine Piano Playing” and “The Art of Pedaling” (both richly illustrated with musical examples) to “Memorizing Piano Music,” “Silence—Its Use and Misuse,” and “The Metronome—Its Beneficial or Harmful Side.”

SILVIO SCIONTI, after establishing himself as a much admired pianist and teacher at The American Conservatory and The Chicago Musical College, moved with his wife Isabel to New York City where the duo performed in all the major music centers in Europe, Mexico, and the United States. World War II interrupted that career and Scionti became Artist in Residence at the University of North Texas in 1942. As master teacher, clinician, conductor, arranger of works for two pianos, editor of many works for solo piano, and writer of essays on various aspects of piano playing, he attracted some of the most gifted pianists from all over the country, thereby greatly enhancing the reputation and growth of the School of Music. Throughout Scionti’s tenure at North Texas, his students won national and international piano competitions, ranking alongside students at music schools such as Juilliard, Eastman, and Curtis.

JACK GUERRY holds the rank of Alumni Professor of Music (Piano), one of the distinguished professorships at Louisiana State University. His B.M. and M.M. degrees in piano are from the University of North Texas where he was a scholarship student of Silvio Scionti as well as his assistant. He was granted the Ph.D. in music from Michigan State University.