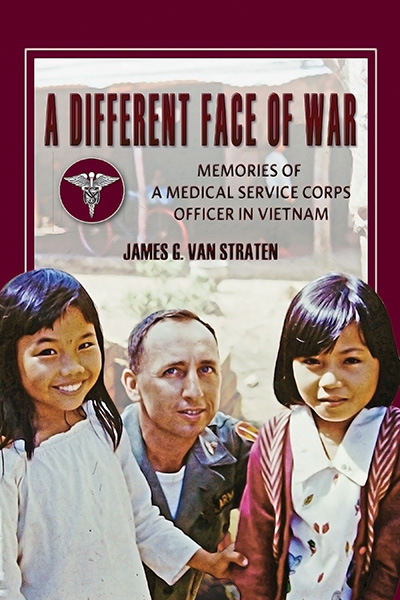 A Different Face of War: Memories of a Medical Service Corps Officer in Vietnam

About Van Straten's A Different Face of War

Listen to an interview with James G. Van Straten for the War and Life YouTube interview series hosted by Preston Jones of John Brown University.

A Different Face of War is a riveting account of a Medical Service Corps officer’s activities during the early years of the Vietnam War. Assigned as the senior medical advisor to the Army of the Republic of Vietnam in I Corps, an area close to the DMZ, James G. Van Straten traveled extensively and interacted with military officers and non-commissioned officers, peasant-class farmers, Buddhist bonzes, shopkeepers, scribes, physicians, nurses, the mentally ill, and even political operatives. He sent his wife daily letters from July 1966 through June 1967, describing in impressive detail his experiences, and those letters became the primary source for his memoir.

The author describes with great clarity and poignancy the anguish among the survivors when an American cargo plane in bad weather lands short of the Da Nang Air Base runway on Christmas Eve and crashes into a Vietnamese coastal village, killing more than 100 people and destroying their village; the heart-wrenching pleadings of a teenage girl that her shrapnel-ravaged leg not be amputated; and the anger of an American helicopter pilot who made repeated trips into a hot landing zone to evacuate the wounded, only to have the Vietnamese insist that the dead be given a higher priority.

“If you have any interest in the history of the Vietnam War, the age-old culture, values, and religions of the Vietnamese people, the terrible effects of the war on the civilian population and the challenges of providing medical advisory support—this book is for you. I could not lay it down.” —LTG Quinn H. Becker, Former U.S. Army Surgeon General

“This book is gold… . The reader can easily apply the observations from 50 years ago to very similar circumstances today.” —The AMEDD Historian

After his thirty-year military career ended in 1986, JAMES G. VAN STRATEN moved into academia. In 1990 he was appointed dean of the School of Allied Health Sciences at the University of Texas Health Science Center at San Antonio. He and his spouse now reside in Windcrest, Texas.

A Different Face of War: Memories of a Medical Service Corps Officer in Vietnam