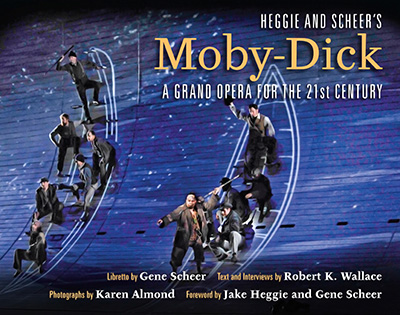 Heggie and Scheer's Moby-Dick: A Grand Opera for the Twenty-first Century

About Wallace's Heggie and Scheer's Moby-Dick

Jake Heggie and Gene Scheer’s grand opera Moby-Dick was a stunning success in the world premiere production by the Dallas Opera in 2010. Robert K. Wallace attended the final performance of the Dallas production and has written this book so readers can experience the process by which this contemporary masterpiece was created and performed on stage. Interviews with the creative team and draft revisions of the libretto and score show the opera in the process of being born. Interviews with the principal singers and the production staff follow the five-week rehearsal period into the world premiere production, each step of the way illustrated by more than two hundred color photographs by Karen Almond.

Opera fans, lovers of Moby-Dick, and students of American and global culture will welcome this book as highly readable and visually enthralling account of the creation of a remarkable new opera that does full justice to its celebrated literary source. Just as Heggie and Scheer’s opera is enjoyed by operagoers with no direct knowledge of Moby-Dick, so will this book be enjoyed by opera fans unaware of Melville and by Melville fans unaware of opera.

“Wallace really gets the piece, he really loves the piece and every aspect of that is evident. This is a wonderfully scholarly work, but there is great heart in it as well. I was fascinated.” —Darren K. Woods, General Director, Fort Worth Opera

Panel discussion of the opera “Moby-Dick” with composer Jake Heggie and librettist Gene Scheer. The discussion took place on Oct. 11, 2012. The opera, which was first performed in Dallas in 2010, had received its San Francisco Opera premiere the night before, on Oct. 10. Participating in the discussion were Samuel Otter (UC Berkeley English), John Kapusta (UC Berkeley Music), and Robert K. Wallace (Univ. of Northern Kentucky English). The event took place on the campus of UC Berkeley.

After earning his Ph.D. from Columbia, ROBERT K. WALLACE began his career at Northern Kentucky University, where he is Regents Professor and teaches courses in Literature and the Arts. Wallace’s books include Jane Austen and Mozart, Melville and Turner, Frank Stella’s Moby-Dick, and Douglass and Melville. He lives in Bellevue, Kentucky.

Heggie and Scheer's Moby-Dick: A Grand Opera for the Twenty-first Century