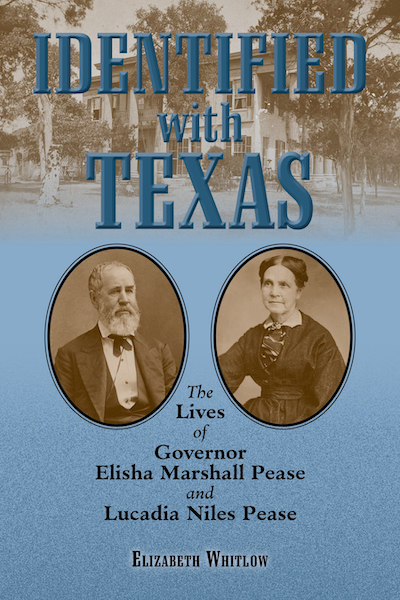 About Whitlow's Identified with Texas

Identified with Texas is the first published biography of Texas Governor Elisha Marshall Pease (1812-1883), presented by historian Elizabeth Whitlow as a dual biography of Pease and his wife, Lucadia Niles Pease (1813-1905). Pease volunteered to fight in the first battle of the Revolution at Gonzales, and he served with the Texan Army at the Siege of Bexar. Pease served in the first three state legislatures after Texas joined the Union in 1845, was elected governor in 1853 and re-elected in 1855, and returned to the governorship as an interim appointee from 1867 to 1869 during Reconstruction. His achievements in all these positions were substantial.

Lucadia Niles Pease was known as the Governor’s “Lady.” Moreover, her early, independent travel and her stated position as a “woman’s rights woman” in the 1850s, as well as her support for sending a daughter away to college in the 1870s to earn a degree, all serve as markers of her intelligence and the strength of her convictions.

To tell their story, Whitlow mined thousands of letters and papers saved by the Pease family and housed in the Austin History Center of the Austin Public Library, as well as in the Governor’s Papers at the Texas State Library and Archives Commission.

ELIZABETH WHITLOW holds a BA with a double major in geography and history and a secondary school teaching certificate. She received an MSW from the University of Denver and spent much of her career in social service work. She lives in Austin, Texas.