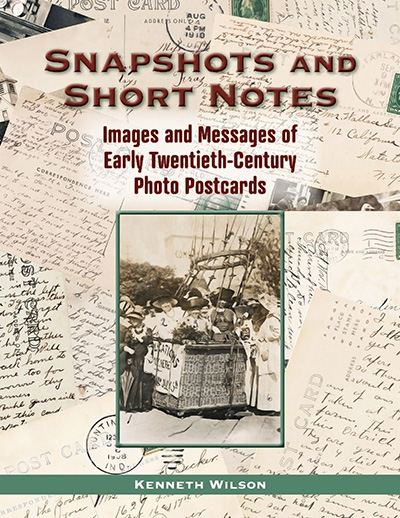 About Wilson's Snapshots and Short Notes

Snapshots and Short Notes examines the photographic postcards exchanged during the first half of the twentieth century as illustrated, first-hand accounts of American life. Almost immediately after the introduction of the generic postcard at the turn of the century, innovations in small, accessible cameras added black and white photographs to the cards. The resulting combination of image and text emerged as a communication device tantamount to social media today.

Postcard messages and photographs tell the stories of ordinary lives during a time of far-reaching technological, demographic, and social changes: a family’s new combine harvester that could cut 40 acres a day; a young woman trying to find work in a man’s world; the sight of an airplane in flight. However, postcards also chronicled and shared hardship and tragedy––the glaring reality of homesteading on the High Plains, natural disasters, preparations for war, and the struggles for racial and gender equality.

With a meticulous eye for detail, painstaking research, and astute commentary, Wilson surveys more than 160 photographic postcards, reproduced in full color, that provide insights into every aspect of life in a time not far removed from our own.

“Wilson presents a new approach… and his detailed accounts of cards draw you in and make you a believer.” —Robert Bogdan, co-author of Real Photo Postcard Guide: The People’s Photography

KENNETH WILSON has an MBA from the University of Texas, where he also studied Art. A retired silversmith, artist, and craftsman with a life-long interest in American history, Wilson has collected, catalogued, and researched real photo postcards for more than twenty years. He lives in Dripping Springs, Texas, with his wife, the artist Debbie Little-Wilson.