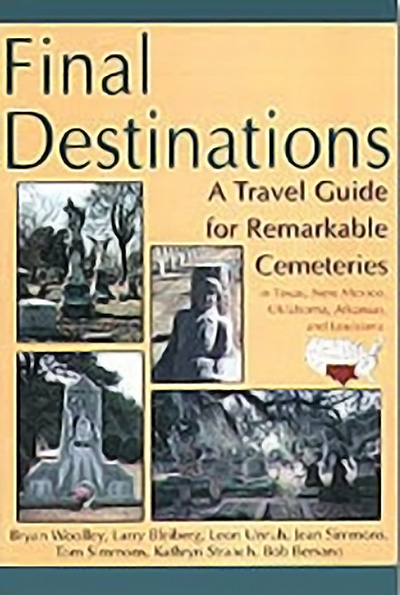 “Every cemetery is worth visiting, and the people in them are worth trying to remember. They were much like us.” Thus the writers of The Dallas Morning News set out to explore the cemeteries of Texas and the surrounding states for the newspaper’s Travel section. The more than 45 stories serve as history lesson and travelogue to the more than 60 cemeteries, chronicling the resting places of famous people and the tragedies borne by ordinary people.

The compilation reaffirms our fascination with cemeteries and their status as tourist attractions. People visit cemeteries in large numbers. Evidence of crowd control abounds from signs directing traffic to the grave marker of President Clinton’s mother in Hope, Arkansas, and the large steel cage protecting the tombstone of Billy the Kid at Fort Sumner, New Mexico, to the monument in New Orleans made famous by the movie Easy Rider and Bonnie Parker’s coveted headstone in Dallas, relocated to prevent theft.

The stories also demonstrate that the reasons people flock to cemeteries are as varied as the people interred there. Cemeteries hold some of the most interesting sculpture and folk art in our region. Unusual graves include the Sturrock Cemetery in Tyler County, Texas, started when the family arrived from Scotland in the 1830s. The dozen sandstone crypts are said to resemble the style of the family’s houses in Scotland. The graves at the Alabama-Coushatta Indian Reservation in Polk County, Texas, are adorned with decorations such as sea shells, stones, skillets, and teddy bears.

New Orleans cemeteries are a tourist industry by themselves, featured in movies and Anne Rice novels. The oldest standing cemetery is St. Louis No. 1, on the edge of the French Quarter. The most famous grave here belongs to Marie Laveau, the voodoo queen. Louisiana’s French and Cajun cultures come alive in its cemeteries and many plantations, such as Afton Villa and Rosedown, contain cemeteries.

Cemeteries hold fascination for history buffs and family genealogists, and this book is a valuable guide for both. It provides information about the more well-known gravesites, such as Sam Houston’s at Huntsville’s Oakwood Cemetery, but also the less well-known locations. Two graves in unassuming cemeteries are the final resting places of two of the greatest blues artists of all time: “Blind” Lemon Jefferson in Wortham, Texas, and Huddie “Leadbelly” Ledbetter in Mooringsport, Louisiana. Do you know where Hoss Cartwright is buried? The authors of this handy guidebook do.

This book will also illuminate the history behind the sites and the people who lie buried there, as well as provide information on nearby places to stay. It’s the ideal book for the amateur genealogist and weekend historian.

BRYAN WOOLLEY is a native Texan and a senior writer on the staff of the Dallas Morning News. Among his many books are Sam Bass (Spur Award winner), We Be Here When the Morning Comes (W. D. Weatherford Award winner), Mythic Texas, and Final Destinations (UNT Press). He lives in Dallas.